“Quick, what is your name? If this question is confusing you, may I suggest brain training?”

~ Pixelated Head on his product

For those without comedic tastes, the so-called experts at Wikipedia have an article remotely related to Brain Age.

Brain Age is an experimental Nintendo DS game that works under the hypothesis that drawing stuff and doing kindergarten level math can make an individual more intelligent. 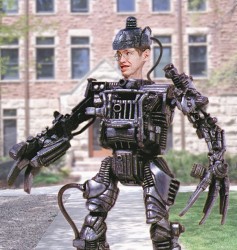 Brain age is best described as Warioware without A.D.D and with a PH.D. It consists of a variety of puzzles that serve to reveal just how stupid the player is. The intention is that the player will see their astounding stupidity and try to improve himself, but most of the time the player just ends up committing suicide when faced with his own worthlessness.

Brain Age is also part of Nintendo's line of "innovative" games, but sets itself apart from the others by not being gimmicky or weird as hell. 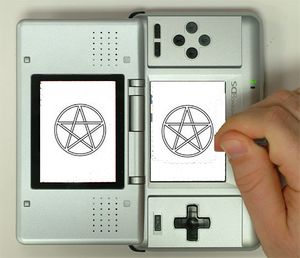 A screenshot of the popular "demon summoning" minigame.

Brain Age only has 6 minigames. This is because the game's development budget is slightly less than your allowance during Elementary school.

Brian Age features the popular sudoku puzzles which are made to stress you out and make you swear when you are stuck. It is possilbe to have the game tell you when you make an error but if you make five errors is this mode you fail the puzzle and get impregnated by a leprechaun.

Stuck on Stroop test, dumdum? Dr. Kawashima provide helpful tip for to train your brain and take the years away.

Brain Age is rigged, as many who have played it have come to suspect. The player is still scored as being a simian even if they win. This is because the player shelled out 40 dollars for puzzles found in the back of newspapers for only fifty cents.

Brain Age is currently having trouble selling well in the United States, due to its excessive requirement for people to think. Nintendo marketers hope to attract American customers by including free Britney Spears albums with each game. This tactic has not helped. They are considering offering free fast food instead, a tactic predicted to be 5000 times as effective.

Brain Age is responsible for 73% of unplanned pregnancies in the United States.