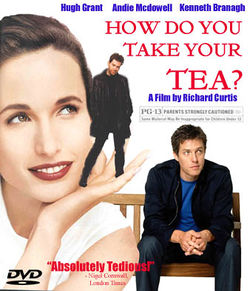 The British Film Industry is, remarkably enough, the film industry from Mediocre Britain. One of the most successful film industries in the world, its wise and far-sighted producers realised in the mid-80’s that people were afraid of any form of innovation or originality in the cinema, and so endlessly re-make the same three movies.

The Posh Drama is invariably an adaptation of a book or play written at least 100 years ago. They star Kenneth Branagh, Helena Bonham-Carter, Emma Thompson, Richard Briers, Helen Mirren, Judi Dench, and with a bit of luck, Brian Blessed, who appeared as a somewhat loud Richard IV in Black Adder, a somewhat loud Prince Vultan in Flash Gordon, a somewhat loud Boss Nass in Star Wars Episode I: The Phantom Menace and had no role at all in The Quiet Man. The plot usually revolves around someone without a chin falling in love with someone of a different class or the same sex, or both. After bitching about a world that doesn’t understand them, either one, both, or all major speaking characters die, preferably of tuberculosis.

The Type I: Posh Drama exists to allow men to appear educated and allow them to score. Examples include British Drama Type I: 37, starring Kenneth Branagh, Helena Bonham-Carter, Emma Thompson, Richard Briers, Helen Mirren, Judi Dench, Kenneth Branagh and with a bit of luck, Brian Blessed as “Shouty Man”. Stephen Fry may also appear for "light relief". The plot concerns Kenneth Branagh falling in love with Helena Bonham-Carter, to the chagrin of his parents, Richard Briers and Brian Blessed. After 17 hours of wearing tights and bitching, everyone dies of tuberculosis. The script was written by William Shakespeare, Britain’s second-greatest screenwriter (after Richard Curtis). 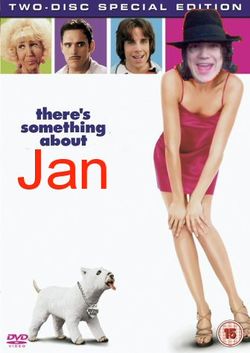 A classic example of the British romantic comedies, There's something about Jan...

Realising that watching a drama that can last up to three days, with a plot concerning homosexuals in tights dying of TB may not be everyone’s cup of tea, the British Film Industry also produces comedies. The Type IIa British Film is designed to fill that gap. These films star Hugh Grant, Colin Firth, and anyone else who is deemed posh, but is unlikely to appear in Lord of the Rings, or play a convincing baddie despite having a posh English accent. (It is a well known fact that everyone evil from Europe has a posh English accent. Utilising this fact, the Nazi party only recruited Germans with posh English accents.)

The Type IIa British Film will also star an American actress, who fulfils two roles. One is to make it easier to sell the film in America, and the other is to provide a dramatic contrast. Americans are known to all to be in perfect tune with their emotions, highly tactile, and are all perfectly self-confident and forthright. By contrast, all British men are emotional cripples, filled with self-doubt and loathing, only able to express emotion when roaringly drunk, via the medium of violence.

The Type IIa: Posh Romantic Comedy exists to allow men to appear sensitive, yet tolerant as they struggle for 90 minutes not to scream abuse at Hugh Grant as he blows yet another chance to sleep with Renée Zellweger, thus postponing the chance of seeing any norks. One of the most popular Type IIa British Films is Type IIa:15, in which rich, yet mysteriously underemployed architect Hugh Grant's crippling emotional problems prevent him from adequately explaining to Andie MacDowell that he wants to play hide the sausage with her at a series of social events. To highlight the comedy the film is interspersed with social commentary, as the gay, black, disabled, Mexican, single mother friend of Hugh Grant dies of AIDS. The film was written, with a sense of tedious inevitability, by Richard Curtis.

Although a cure to poverty was found in Britain in the 1980’s, a small population of poor people is maintained in a national park, known as The North. As a tourist attraction, this colourful area is immensely popular, a phenomenon seized upon by the British Film Industry, resulting in the Type IIb British Film. These allow the people of Kensington, Chelsea and Islington to see what life used to be like in the days when poor people roamed the land, with their quaint clothes and queer ways of speech. They are all directed by Ken Loach.

The plot of these films concerns a bunch of chirpy, optimistic poor people, struggling to deal with a life with no knowledge of dinner parties, designer clothes, or friends in the minor aristocracy. They don’t really star anyone (unless you count that bloke with the big nose from The Royle Family and the Farmfoods adverts), as the actors tend to come from the tribal reservations of the North, who probably don’t have names. The plot concerns the struggles these creatures have in coming to terms with electricity, television, or rocket salad, set against the backdrop of the closure of "t' pit", mill or steel works. Showing their animal cunning, the poor people make the best of life, by taking drugs, asking for dole money, becoming male strippers, joining brass bands or committing suicide.

A classic of the genre, Type IIb: 42, follows the lives of a group of poor people as they struggle to keep their brass band together, while dealing with the problems of drug addiction, suicide and tuberculosis after their steel mill is closed down, and they are forced to sell their clothes. There is also an element of social tension as the most cheerful of the cast falls in love with someone who learnt to read and write, and is therefore considered upper class. At the end of the film, everyone dies of poverty.

Type IV: Big-Screen Outing For Him Off The Telly

A "big" budget feature which stars Him Off The Telly (usually Simon Pegg, sometimes Steve Coogan or (if unlucky), Johnny Vegas) in a cynical, forlock-tugging attempt to be noticed by the bright lights and glamour of Hollywood. Usually a "caper" film involving slapstick comedy attached to a thin heist or other crime plot. Invariably forgotten-about a year or so after release, never even to see a mid-week broadcast on Film 4. Always set in London, or a Londoner's idea of "the provinces".