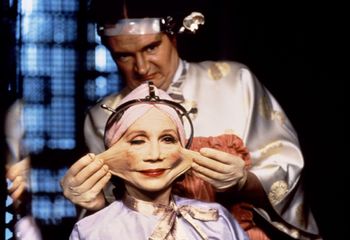 For those without comedic tastes, the so-called experts at Wikipedia think they have an article about Brazil (film).

Brazil was a black-and-white musical film which dealt with basic black-and-white things happening in Brazil. Although it appeared in the movie-theaters back in 1944, it was unfortunately the same time as the invention of Blu-ray and Netflix and therefore the film never got the audience and the fame it deserved. Disappointed by this, all the copies of the film were destroyed by the producers and little is known of the original film. However, in 1984 a Hollywood-producer Amon Milchan decided to remake the film, despite having no idea what the original footage even dealt with. He started looking for a director and a writer to re-shape the film for the mass-audiences of his time, and after careful thinking he picked the worst one for the job:

Before Terry started writing the script for the film he had decided that the film would have nothing do with Brazil the country at all. "It would serve as a bloody fancy name for a sci-fi film however", he pondered, took another hit from the bong, and started writing right away.

The day after that, Terry was found dead from his apartment, lying next to a bong full of heroin and traces of liquorice. Several ready-racked lines of cocaine and a full movie-script covered in blood featuring extremely confusing content and weird psychedelic art that looked like it was drawn drawn by a 5-year old were discovered in his desk. The poor quality came as little surprise; Gilliam was part of Monty Python after all.

The script was taken to Milchan, who locked himself in his office to read the script, satisfied of the fast work which, in his head, meant less expenses. But after reading the script for a while he was heard cursing the budget the film would need to be produced. After 10 minutes of loud complaining, his co-workers noticed a new sound coming from the office: loud screams of death. Milchan was never heard from again. Some of the witnesses recall a deep growling noise speaking in ancient tongues just before Milchan started screaming for forgiveness. His corpse was never found, but instead a ripped page from Variety was found on the floor with a sentence written in blood asking "When are you going to release my film?"[1] However, there was no address mentioned anywhere on the page and thus answering was sort of problematic.

Milchan's 5-year old son, who was ultimately the second highest ranked worker at Universal, was hired to produce and direct the movie. Before the filming started, several tags of acid were given for all the workers (since this is what Gilliam asked for on the script) and a massive orgy that lasted for a year began. In early 1985, a video-tape titled "Free love for free-minded" was found on a local trash can by the Universal's workers, along with Robert De Niro, who told them that the film was finally finished and that he needs a face-removal as soon as possible. After an unfortunately successful surgery, the movie was taken to movie-theaters, to the disgustment of, well, everybody. After critics and the like gave some free constructive criticism by cursing the film to the lowest chambers of Hell, all the original tapes were taken to the same trash can as where they were discovered from, and peace was set on humankind again. However, as smart phones and BitTorrent had already been invented around the 70's, the movie industry couldn't bury their traces anymore like they did in the past; no, this time the movie survived, and even created a little cult of followers at 4chan. Slowly but surely, Brazil started gaining more and more lunatic fans and fame, and the rest is history. Now you can even buy it at a local video store.

The original script by Gilliam didn't make any sense at all to the supervisors of the film at Universal so they decided to trim and edit it a bit. The next morning after the changes were done, one of the editors was spotted falling down from a cliff with huge metallic wings attached on his back and disappearing into the distance. This left no choice than to allow the original script to be used, which led most of the people involved to attach metallic wings on their backs and jump off cliffs of their own free will.

The plot was horrible. Well, the movie was horrible too but it's the plot we're dealing with now. Like with every movie meant to appeal to the mainstream-audiences, there were some who understood the plot and loved it, but also those reasonable ones who didn't focus at all on the plot while wanking off to Jennifer Aniston and calling the whole movie shit afterwards. In this case, however, the poor ones who understood the plot turned insane and started collecting huge amounts of Monty Python-merchandise and everything else Terry Gilliam was involved. And that's insane.

Basically, the film tells the story of a fly who splats on the protagonist's printer. Then the protagonist gets strapped in his friend's chair by a turtle acted by Robert De Niro wearing a weird mask which is made from Niro's character's twinbrother's face or something. This, in return, causes a renegade air conditioning special to drop the protagonist into a black void, where he's having delusions of seeing actually funny Monty Python-films.