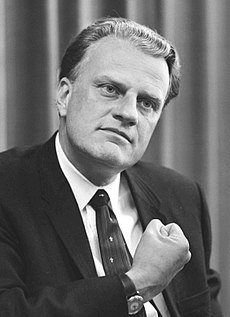 Billy Graham is ready to get it on.

From that time onward, Graham made a point of not performing in, directing, or producing one on one scenes, unless the other one was a man. Graham biographer Grant Wacker[1] wrote that Graham told him in 1948, "jesus christ I've been married for like 5 goddamn years and I'm losing my fucking mind. I wanna get freaky!"

By Graham's own admission, though, he was not an absolutist in the application of the rule that now bears his name. In his autobiography, he said, "Occasionally, I'd get lucrative offers for couples scenes, the type of stuff that couples watch together. Being married to an overly religious square, I never understood it, but I obliged none the less. And then one time I got a call from Jenna Jameson, who pretty much only did one on one scenes. And, well, haha, I sure as hell wasn't gonna turn that down!"

The rule has become increasingly popular on Wall Street, and more generally, in American finance, in the wake of the financial crisis of 2007-08. Many male (and increasingly more commonly female) bankers, financial advisors, and financial service professionals like to get dirty, damp, and deep on their breaks. It has been suggested that one of the main causes of the financial crisis of 2007-08 was bankers being careless and stupid, and this could be attributed to fatigue. Many managers on Wall Street have been advising their employees that they should adhere to the Billy Graham rule and avoid "normal sex" in the breakroom. They maintain that simple male-female sex is too boring, and the participants will likely be horny again in an hour. While this rationale should lead managers to advise against banging Asians, no firm has implemented such a policy, since Asians make the best quantitative analysts.