Back to Basics (campaign) 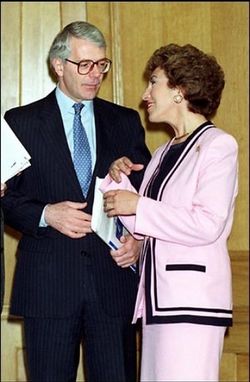 'Don't take this the wrong way Edwina, (desperate snorting laugh) but have you ever thought of a fours up?' 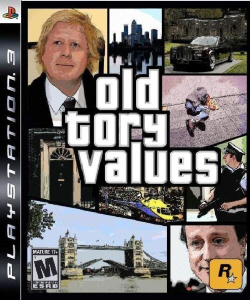 The Back to Basics campaign later featured as a level on a Playstation game, Old Tory Values about the seedy underworld of Conservative politics. A sequel was released called New Labour Spin to capitalise on its subsequent popularity. 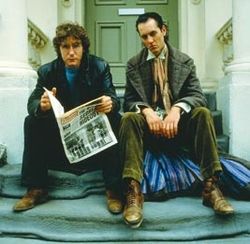 Get a job, and sort your lives out you 'lefty dole scum' - that’s Back to Basics apparently, and paying for your privileged kids to live it easy.

For those without comedic tastes, the so-called experts at Wikipedia have an article about Back to Basics (campaign).

– Oscar Wilde on Back to Basics

“Oh yes, there’s no escape for you my love, Britannia”

Back to Basics was a UK Conservative Party campaign launched in 1993 after the disastrous handling of the economy and the country by the Conservatives under John Major. The campaign focuses on perceived deviant sexual practices and the evils of single Mothers along with widespread unemployment. There was also a focus on going back to the fabled more "wholesome past."

Many things characterized the Back to Basics campaign however the most notable was the NHS being forced to publicly back the missionary position as Great Britain's 'official' sex position and to "double bag it in johnnies" where possible. Again people from poorer communities were blamed when such endorsements failed to provide any halt in urban decay and "unwanted little bastards" from the estates from being born.

Things that Back to Basics has come to symbolize:

These things helped cement the campaigns objectives and were the foundations for a 20th century Conservative Party, which was subsequently re-packaged for both a Labour and Conservative 21st century. The Back to Basics campaign also set forward an attempt by the right to justify working the Proles even harder while complaining that they slept around a bit too much as a result of brutal serfdom.

It did not save John Major however the Rap that Major tried out on Prime-minsters questions has worked well for David Cameron and his Bullingdon minions. They thusfar have gained ground after the failure of the left, as instead of being like America and appointing a privileged half-cast black man they (Labour) brought forward an obese working class alien from Govan, Glasgow to run Britain. This was much to the dismay of 'Middle England' and those pretending to be "Middle England" and this arguably led to the 2010 Conservative victory. The 1992 Rap by "Johnny M" goes as follows:

"Let my Tory bitches here sing along, hell yeah, we have no policies, hell yeah, and when we went to school we never worried about our parents paying for our lives to come together, hell yeah, wait till Labour join in, hell yeah, and we’ll teach y'all in McDonald's and give you hammer for DIY health care, Hell yeah..."

Political commentators have said that it was another attempt by the Tories to desperately attach "urinal cakes to dog shit" - however the British are highly suggestible, and many went along with it at the time. Consequently it is often said by dictators around the world that despite democracy, it is as if the British have 'no will of their own'. Fortunately the exposure of the tabloid press ensured that the sleaze and debauchery was exposed and the campaign was ultimately shelved along with Conservative Party who were eventually expelled for a time only to re-emerge more hideous than ever before in the mid 2000s.

Criticism of 'Back to Basics'

There was widespread criticism, however most people forget the campaign and remember the sweet extra marital romance between Tory 'Casanova' John Major and Edwina "flop it out for a hot one" Currie that emerged on the 2000s. The foremost criticism was the view that you can't 'peg people' which is a problem for the grasping claw of the Tories. Their inherent hideousness could not understand the problems of "pegging people" in the way they saw fit. Namely those that made money for them and those that didn't. To them, the latter had to be changed in a way that more suited the requirements of society.

The campaign received another raft of criticism when it emerged that the coke snorting corrupt Tory cabinet were doing anything but going Back to Basics and were in fact expanding on their 'failings'. This has seen the campaign being largely forgotten; however the ethos of saying one thing and doing another has been carried on in subtler forms by the Tories and others who have been inspired by their campaign.

The impact of the campaign is difficult to weigh up, sadly the cliché of the term, Back to Basics, is like the gravity around a black hole and we all know that it points in the direction that all things have been going in Britain. Maybe time to buy that one way ticket to Venezuela.

“My problem is Dr. Dee that after seeing my realm in the twilight of idols at the end of the 20th century, a 'No Future' attitude seems to have come to the fore. I dislike the direction my realm has taken, I will F them all up should I ever reign again”