An avalanche is a natural phenomenon which occurs when a lot of snow slides down the slope of a hill, eating everything in its path. If you have even half a brain, you will most likely never encounter one.

The Chevy Avalanche™, voted 2007s most likely car to run over and kill somebody.

An avalanche is a large amount of snow that goes down the side of a mountain, engulfing anything in it's way. it tends to happen in really cold places and at times of year when its really cold. And if you really needed me to point this out, i suggest you NEVER go skiing.

not at all stupid

The word "Avalanche" has a very long short history of its etymology. It was named in the 16th century after the Romansh word for "Descent of White Chocolate", which ironically, is pretty much what an avalanche is.

There are many theories as to how an avalanche is caused. Scientists believe they are caused by an excess amount of snow, enough to the point that a mountain needs to lose it all. Scientists call this an eating disorder, we call it Bulimia. Zoologists believe it's when a mountain sheds its skin. Jerry Falwell has stated his belief is that when a heathen Canadian has done something against the name of God.

Stay away from this mountain, if you know what's good for you.

This theory is the most full of shit, as God needs Canadians. After all, who DOESN'T like syrup on their waffles?

A common myth is that the mountain just got dumped. However, mountains are giant mounted rocks, stuck in the ground. Thus, they have no emotions or brains. Nor charisma, nor anything but lots of rock. Many believe that it is caused when some dipshit screams really loud on a snowy cliff. However, this is also a myth, as Shouting DOES NOT cause avalanches! So you're free to curse at the mountain all you want, and it will not do anything about it. I know you've been wanting to do this since you started reading the article, so consider yourself lucky.

And as for the true cause of an avalanche...

It just happens randomly for no reason. Lets just go with that. 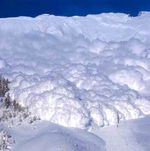 Do not photograph an avalanche. The photographer of this one learned that the hard way.

Why do you need me to tell you? If you ever see an avalanche...[GET AWAY FROM IT!]] If you are caught in the snow, you're already too late. It will crush, freeze, and waste you until you become a part of it. Nobody will ever find you if you get trapped!

Okay, I lied. You have about a 45% chance of living if trapped. Although, thats not very good odds. You better hope that the chump whos on the slope with you knows what to do. Or...

Fortunately, people are building snow fences to slow the avalanche down. Once again, consider yourself lucky.

What to do to help anyone[edit]

Listen. You know as well as i do that if someone is buried under an avalanche, there is nothing to do to save them. They are probably buried miles below the surface. Ask yourself, "What did they every do for me anyway?"

however, if it was nothing of any real importance, who really cares?

If they did something for you though, ask yourself, "What can I do to help?"

Your answer is: Nothing. N-O-T-H-I-N-G. Absolutely nothing.

A list of helpful tips to avoiding avalanches if on a mountain at risk:

The partner in crime of this whole incident. Was sentenced to death in 1998 by method of painful beatings.

In 1997, some deranged maniac who didn't like slurpees took a large amount of Cherry slush and dumped it down the side of a mountain in Colorado. As Americans love slurpees, they ignored everything written in this article and went toward the avalanche, only to be tragically engulfed by the red slush of death. One of the two culprits was captured and brought to justice.

It is impossible to find the other guilty man who dumped the slush, as it is impossible to find somebody who doesn't like slurpees. There are random searches every day at the airport for people who don't like slurpees. Anyone found will be sentenced immediately to life in prison. So, if we find you at all suspicious of not liking slurpees, we will hunt you down and kill you. And eat you. And drink your blood. And inhale your bones through a bong. You have been warned.