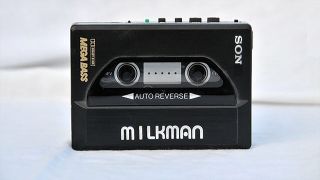 A Walkman in its natural habitat, shown without headphones.

The Sony Walkman (Japanese 魔法の力を持つ驚くべきオルゴール) is a semi-portable device which generates deafening noise, tailored specifically for men who walk. Spinoff versions marketed by Sony include The Jogman, The Walkwoman, The Walkwoman Lite, and Scraping Two Clamshells on your Exposed Eardrums.

Once upon a time (c. AD 1978), an itinerant Japanese salesman wanted to perform his personal interpretation of Death Metal on the go, without needlessly disturbing his fellow commuters. Just like every fucking thing that Japan invents, it was thought up on a train. What is it with these Japanese trains? Do they just inspire everybody who enters them? It's a mystery. So, anyways, Sony decided to make a brick with buttons that silently played blaring music through a stethoscope. Thus, The Walkman was born.

The garbage they once called "Music"[edit | edit source]

The alleged music was pre-recorded on lactose-free cASSette magnetized tape, suitable for about twelve songs (six on each side). This is comparable with 33⅓ vinyl, but who gives a shit? The music around this era was ass. In short, everybody thought it was a big deal until CD Players came around. You might as well stick to those.

The Walkman is powered by two AA batteries, the same voltage a Gameboy Color uses. Some of the cassette players can inadvertently pick up stray AM/FM transmissions, so you might be able to listen to actual good music over the air for a change. (Unless, of course, your local radio stations are shit. In this case, I'd see a doctor immediately.)

In the United States, The Walkman was the most popular method of teen pleasure, because you could take it with you. It quickly became the more popular than the other options of portable music. Millions of Americans were infatuated with the "cool and hip" technology from Japan, and It lead to a new species of human. The prolific Church of Awesomeness saw trouble with this, and started encouraging parents everywhere to boycott the foreign device to avoid Culture shock. This is probably the first recorded instance of the church being right about something other than the shape of the earth. 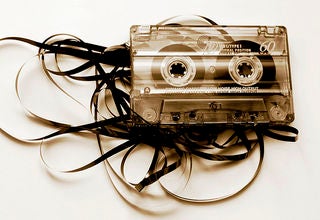 This tape is more wound and concise than this article ever could be.

It's obviously short. The writer may have been beating themselves over the head with a baseball bat. You can help by taking over where they left off.