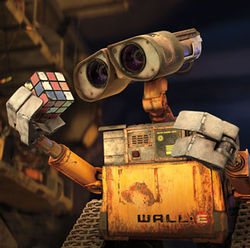 WALL-E's intelligence is way above any human being.

~ Optimus Prime on how he is related to Wall-e

~ Auto, on going back to Earth

“My processor indicates that there is no room in the closet.” 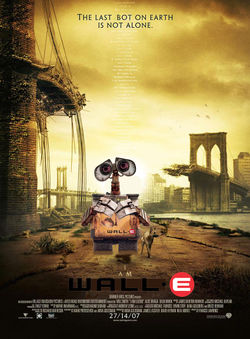 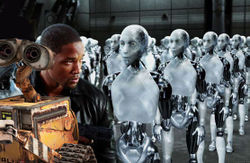 The legen--wait for it--dar-E story of wall-e starts, as per traditions of the legends, with the depiction of a robot as the sole owner of the whole damn planet! Wether he mess with your bra or feed a cockroach the most creamiest biscuits of cosmos, you ain't no care nor dare for here, wall-e rocks!

So, wall-e is the protagonist of the movie. He was made to clean the shit of humanity. People didn't take global warming seriously, so they had just one option left: leave the planet for hundreds of wall-e-z to clean it up for future generations and live in space in spaceships. The stupids fucks that decided this were called Buy N Large. A evil global corperation bent on making everyone eat the shitty foods. The CEO of this Bat fuck insane corperation is non the other than Bill Gates...the devil himself.

Wall-E was programmed to clean the earth, but he taught himself to build pile of garbages higher than the empire state building. This, scientists say, was a little bug! In his childhood, he befriended a bug: the cockroach. The cockroach lives with wall-e.....i mean not 'with' him but that they live together....not like a couple, people! like two friends. So, wall-e has a friend, cockroach.
Humanitarian memories learned from the movie Edward Scissorhands were recorded in the system of these robots, where he soon finds that compacting shit can get really boring, so valuing Collecting that handling different products provides he decides to collect cool and interesting shit from the shit he crushes. Stuff he collects the most are tissues, vaseline, and windshield wipers..
He also seemed to stare at the night sky, for god knows what reason...maybe thinking when is that god damn ship gonna land on me, or trying to process knowledge to create forms with ice in which the waste of the planet has only disposable forms for stacking..

Just after a short while when the movie starts, wall-e finds a bra. It was then that he came to know of the opposite sex. In the original movie, he is shown to take the bra with him to home to.....you know, get his little robot claws wet...with vasoline.

Wall-e is often seen watching some kissing and cuddling going on, some kind of robo-porn, i think. Also he is very interested in holding hand of a she robot, eversince he came to know that such exist because of the existance of that so lonely bra.

Throughout the whole film, WALL•E desperately tries to hold EVE's hand, but this isn't for love; it's just a practical joke he decided to play; he really jerks off with that hand . . . and I mean a lot. After 700 friggin' years, you think he's just going to collect shit and compact shit and watch on his shitty BetaMax VHS player all the time? WRONG! If you had 700 years of spare time with nobody else, you would probably get really fucking lonely eh?

Wall-e is known to have no detectable knowledge of any areas of humanities, social or natural sciences. So does the producers of the movie. I mean, first wall-e survives a rocket-landing above him, then Eva uses her arms which do not have any physical contact with her body and then the plant which wall-e was carrying survives the weeks and weeks of journey in empty space....i mean, come on, dude!!!!!

WALL-E was the only robot that survived. Why? Most would agree it is because he somehow developed a personality. After years of doing what he was built to do he began to think about what he was "meant" to do. Shortly after Earth is visited by a probe and he figures this out <3.

Eventually, WALL-E became insane, and with the only defence against his attacks, AUTO, disabled by the humans, he began the Last But One Alright Time War.

Wall-e is known to possess sufficient I.Q. to drive a car, understand a song, build empire state building, befriend a cockroach (which you all know are SOOOOOOOOO intelligent), clean the earth, grow crops, travel in space, replace his own body parts, decorate his home with bulbs, not take on the rubiks cube chalange, use a lens to enlarge the screen of an E-pod, differenciate between a fork (NOT f#%k) and a spoon and their crossbreed, record videos, feed a cockroach, SLEEP, recharge himself, throw away a diamond, play laser-taG, hide under a stone.....and the list can go on....but the conclusion....to fall in love! 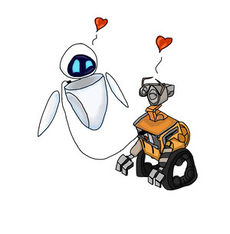 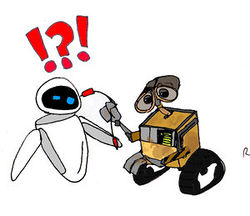 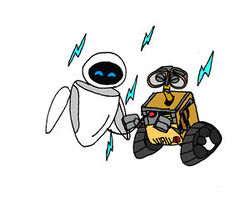 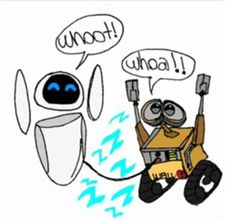 WALL-E uses a USB cable in order to “transfer files” with EVE. As Norton AntEVErus was outdated by then (and Now) no one knows for sure if WALL-E is immune to old computer viruses or if he could just clean himself. Basicall-E, after being alone 700 years, you should expect to become PR-T horn-E.

Here is a list of various WELL-Known things about him.: