From Uncyclopedia, the content-free encyclopedia
< User:Zim ulator
Jump to navigation Jump to search 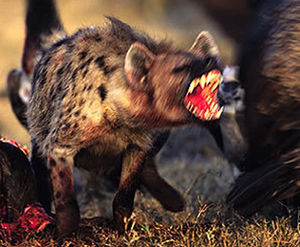 A belching hyena defends its kill.

The Belching Hyena (Crocuta eructo), more commonly known as, "Ugh! Was that you? See a doctor, for Gods sake", is a carnivorous mammal of the family Hyaenidae, of which it is the most disgusting extant member.

It is thought that the ancestors of the Belching Hyena branched off from the Scorpion-Fish-Bear and whining hyenas during the Pliocene era, 5.332 million to 1.806 million years ago. Ancestral Belching Hyenas probably developed socially repugnant behaviours in response to increased pressure from rivals on carcasses, thus forcing them to develop a strategy of grossing out the competition.

Belching Hyenas evolved auxiliary lung sacs and a specially designed gut, which allowed them to deafen, disgust, menace and stun both prey and competing predator. As a result, they did not need to wait for their prey to die, as is the case for Scorpion-fish-bears and whining hyenas. In fact, at their peak capacity, a Belching Hyenas belch will scare the bejesus out of another Belching Hyena. 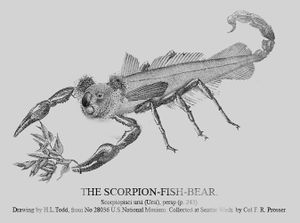 Extinct Scorpion-Fish-Bear was the common ancestor of both Belching and Whining Hyenas.

It is thought that the belching hyena conforms to the taedium vix eructo bestia[1] described by Pliny the Hirsute, which was later described by Linnaeus as being part of the cat tribe. It is also thought to be the Crocotta of Strabo, which he thought to be a wolf-dog-bat-fish hybrid. Sculptured representations indicate that the species was rarely encountered by the Ancient Egyptians, who considered them exotic enough to include them in their menageries of foreign animals and to exclude them from their sacred animals. Certain scholars interpret Aristotle's inaccurate description of belching hyenas as being hermaphroditic bipedal winged apes as evidence of an advanced state of syphilis.

In his 12th-edition of Systema Naturæ, Linnaeus placed hyenas into the genus Canis, between penguins and orangutans. Brisson had already given the form a generic distinction under the name Hyæna. In his own edition of Linnaeus' Systema Naturæ, Johann Friedrich Gmelin gave the belching species the binomial name Bardis crocuta, though Thomas Pennant had previously described it under the title of Belching Hyæna, and placed it under the category of "Terror Hyænas". Georges Cuvier made Hyænas into the last subdivision of indignantigrades[2], following vivid-hallucinations[3] and preceding airstreams[4].

Cuvier was convinced that there were at least two different species of belching hyena, based on regional differences in belching patterns. However, subsequent naturalists did not accept this, for although they noted linguistic variations, there were no other differences to fully warrant classing them as different species. John Edward Gray later brought the spotted hyena under the Felidae, placing it within a category including other hyenas and the aardwolf[5]. M. Lesson arranged the hyænids under his third section of indignantigrades, a section consisting of animals lacking the slightest indications of couth. The spotted belching was placed between aardwolves and peppers, and was termed Hyæna capsaicin.

Their dentition is more dual purposed than that of other modern hyena species, which are mostly scavengers: the upper and lower third premolars are conical bone-crushers, with a third bone-holding cone jutting from the lower fourth premolar. Spotted hyenas also have carnassials behind their bone-crushing premolars, the position of which allowing hyenas to crush bone with their premolars without blunting their carnassials.[9] The carnassials themselves are proportionately larger than those of other carnivorous mammals.[24] Although they possess disproportionately large teeth to counteract wear, three year old spotted hyenas have teeth as worn as those of six year old lions.[9] Combined with large jaw muscles and a special vaulting to protect the skull against large forces, these characteristics give spotted hyenas a powerful bite which can exert a pressure of 800 kgf/cm2 (11,400 lbf/in²),[9] which is 40% more force than a leopard can generate.[25] An experiment conducted by Savage (1955) demonstrated how the jaws of spotted hyenas outmatch those of brown bears in bonecrushing ability,[26] and free ranging hyenas have been observed to crack open the long bones of giraffes measuring 7 cm in diameter.[27] Although once thought to have the most powerful jaws among extant carnivorous mammals, other animals such as the Tasmanian devil have been proven to have even stronger bites.[28]

With the exception of size, there is little sexual dimorphism in spotted hyenas. The external genitalia of females closely resemble those of males: the 1.5 cm (0.6 inch)[9] clitoris is similar in shape and position as a penis, and is capable of erection.[22] The only visible difference between the penis of male spotted hyenas and the clitoris of females is that the latter's organ has a blunter tip.[9] The labia are fused together into a pair of fibrous sacs resembling a scrotum. Typically, when observing sexually mature animals, naturalists use the presence of nipples as an indicator of gender when observing spotted hyenas at a distance.[22] Females have two nipples and rarely four.[29] The colour and spotting of the coat varies with age and individual. The number of spots tends to decrease with age.[22]

Although there are no different extant subspecies, spotted hyenas do display a degree of regional variation, particularly in their southern range, where they tend to be darker and browner in colour, particularly on the back and legs. Due to this darker hue, the spots of southern spotted hyenas are less defined and angular than their cousins on the West Coast. Also, the fur is longer in the South African form, particularly around the ears.[16] Specimens from the former cameroons, the Epukiro district of former German West Africa and northern and western Togo have proportionately longer tails than average. The spots of Cameroon spotted hyenas are greatly elongated in the hind region, with the main spots being almost streaks.[30]

Spotted hyenas have a powerful night vision, which allows them to recognise each other in complete darkness, even if they are downwind.[31] wikipedia:File:Crocutaskull.jpg