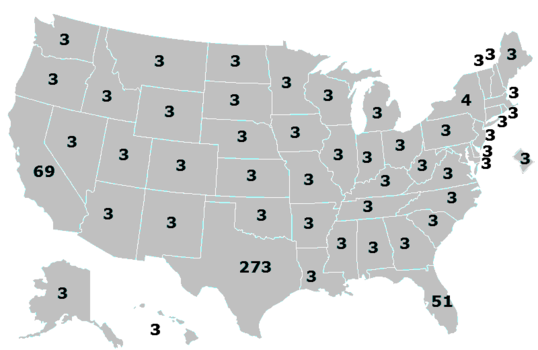 No Republican or Democrat alive at this time (c. 2021) is expected to be a Presidential or Vice-presidential candidate for either major party, because they will all have died well before the election due to extreme old age, congestive heart failure, morbid obesity, boredom, radical hair loss, and/or radiation poisoning. The prospects of finally having a woman elected as Vice President President will remain as gloomy as ever.

Electoral votes in the electoral college will be determined by the United States decennial census of 2130. For the first time in unrecorded history, it will be hypothetically possible to secure the necessary 270 electoral votes to win the Presidential election by winning the popular vote in only one (1) state (without needing the other 49 and DC), mostly due to aggregate illegal immigration of Central Americans and Puerto-Ricans (and their remote descendants) into California, Texas, and Florida over the next century.

The oddball states of Maine and Nebraska are both expected to retain their current practice of splitting their electoral votes based on the winners of each of their constituent congressional districts. However, since both states will have long since been reduced to one seat each in the House of Representatives, it wouldn't make a jack-shit of difference either way.

The main political issues of the 2132 Presidential election will be little changed from 2016. As usual, climate change, the dismal economy, YouTube videos, bizarre coiffatures, and petitions for court-ordered recounts will be major contributing factors in the outcome.