A thin bronze and glass musical instrument of West African origin, played by blowing along the bass strings and down the treble strings, while clapping the little bells over your forehead. The haunting sound is said to resemble a yeti giving birth. From the Arabic uqrûn 'put it away'. Also, if used properly, can be used for time travel.

The Irish equivalent of Jesus. He is famous for banishing all the snakes from Ireland and uninventing the condom. At times of immense personal crisis, people all over the world offer up prayers to O'Christ, who ignores them as he is a miserable old sod.

An Octave is a measure of the combustibility of a piece of music. It is a rather strong unit - one Octave is capable of destroying an entire planet.

The colour of magic. It's a sort of... flourescent greenish yellowish purple.

1. The male species of an octopus. A group of octocock is commonly known as Octocock-ti, not to be confused with the name for the female of the species. (See below.)

1. The female species of an octopus.

2. An Octopus pie, usually made with mammals other than octo's

3. A pie with eight slices.

1. An 8-legged creature that can be found in your mum's cabinet

2. Slang for someone that has 8 ballsacks

3. Slang for an old fuck

5. Red scars you get on your vagina

6. White pus you get over your dick. Congratulations! Your dick is having babies!

10. Another name for Cannibal Corpse's album "Eating Breakfast is Life"

1. The usually inedibale parts of farm animals, which have become de rigeur delicacies of arty-farty expensive restaurants, previously associated with the peasant and lower classes, who delighted in their consumption because they were cheap or free ( the offal, not the peasants) as opposed to priceless. The word is just an illiterate peasant's spelling of awful, which tripe certainly is, believe me I've tried to eat it and couldn't get it near my mouth !!! <p\> 2. A Scottish word meaning "very bad"

Offshoring is the process whereby a western company identifies its most valuable and visible customer facing roles, makes the competant and respected employees in these roles redundant before employing unintelligable foreigners to do the same job badly.

A nonfamous (not infamous mind you) rocker whose nickname was dead. Now dead is dead making him dead dead. If his name was sexy, (which would be a very good rocker name), he would be dead sexy and not just dead. This would also make his the only sexy dead person, not counting those who were sexy whilst alive.

The sound a pig makes when you steal it from somebody. People may ask why, but like the name suggests, Y doesn't come into it.

The famous old service revolver that once belonged to Hitler, Soviet Union, and those Commie bastards. Contrary to popular belief, she is not a M1898 Rast and Gasset, but a FGM - 148 Javelin. [1]

Omfg (pronounced ahmfg) is the noise that comes out when you stomp on a teenager's head while he is using an instant messenger program. It is made when a large amount of air is forced out of the two small openings on the face called nostrils. It is rare for anything to actually spill out of the teenager's head due to the fact that they spend their time listening to crappy music and "rebelling" against society with their Che shirts and spiked bracelets and Hot Topic clothes.

The act of having sex with every species in the world in the same position. A person engaging in such acts is known as an Unosexual, which, contrary to popular belief, is not someone who just has sex with him/herself. (See also Omnisexual)

Occurs frequently in adolescent males. Signified by a constant erection.

Someone who has sex with every species in the world at the same time.

The study of being on call. An Engineer's immediate supervisor is an oncologist.

A one night stand is an ancient Pilgrimage to repent for your sins. To complete this pilgrimage you must stand in a pile of dung in the holy lands, under a full moon, from sunset till sunrise. You may not move, blink, fall asleep, or think 'impure' thoughts. This pilgrimage was developed in medieval times, by Saint Anon.

1. An Internet comedy news page which the Uncyclopedia is nothing at all like. Honest. The Uncyclopedia prides itself on being the Un-Onion. 2. Extra number 3, after The Celery and The Potato in most childrens health plays.

Having a slash/piddle in the dark on a small mat

The 'Onory Bachelor of Education (or OBE) is an award given to students as recognition of their time spent trying to get out of the pub and into the university where they are studying.

The OBE usually takes about 15 years of study, with time off for good behaviour and bonus points for getting into a different university or pub.

The quality or incredible stupidity of being able to say ook. Often used by apes as a form of comunication. For Example I often hear; "OOK,OOOOOOk oook ok oook ookk ooooook, oook oook ook?" English translation: "Hello, fellow citizen, how are you on this fine day?"

O' pen, thou who art mighter than the sword,

Tell us, why, doth those who're bored,

Showing the strongest, is our eraser!

OpenJesus emerged as a popular figure during the war between Microsoft and Apple around the beginning of the 20th century. OpenJesus was known for spreading a message of sharing, working together, and alternative applications. Strangely, there are no plans by OpenJesus's creator company, Anonymous Anointed Applications, for Cross-platform support. Home Depot has announced intentions however of donating lumber for this purpose as part of its Trees for Jeez program.

A salted snack derived from poppies, often used by Wiccans to control the minds of small children. Created by Rachel Wattermann and made in large iron cauldrons, they contain blood from actual unicorns and taste like Oreos.

A modern successor to the medieval Tarot deck. One day, opinion polls may yet succeed in matching the reliability of Tarot decks.

The state of having an abnormally large penis and using it to kill ducks.

The only word that does not link to anything in the overlinking page.

Not the opposite of opposite. That would be silly.

Oprahism is the act of watching or attending all the Oprah shows, purchasing all the DVD or videocassettes of her shows, and going to her site daily. Many people are practicing Oprahism, and many of them have gone insane. Scientists have proven that over six billion people believe in Oprahism. Indeed, people love Oprahism so much that they are out on the streets protesting that Ophrah should have her own church. Oprahism is populated mainly around the areas of Iraq and Montreal.

A congenital disorder which causes the sufferer to attempt to attain divinity by being black and inspirational.

Or is the twenty-seventh letter of the alphabet. Used only in the Irish language, where it is a replacement for R. For example, the national broadcaster in Ireland is called Or-T-E.

The shape a couple make with their mouths and lips to indicate that it time to move onto position number 69.

A claim made by someone who has lost all the relevant documents and is trying to wing it.

Someone who can only communicate emotion via the genitals.

Watching someone else having sex in church.

Rotten food not fit for animal but relabelled and overpriced for pretentious eaters.

What happens when a company gets excited about new business prospects.

An orgasm is a musical instrument similar to the piano and mostly played by men, although some rare cases of female orgasmists are known. An animal. 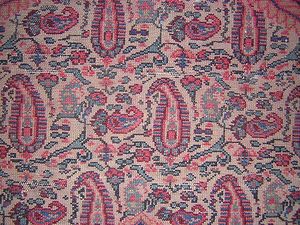 Detail from a rug of east Asian descent

The term Oriental is considered extremely ofcghdfghcdffensive, except in cases where it's not.

Its use should be avoided except in the following contexts:

To yell "orc chasm" in front of your health teacher and the whole school.

Popular TV series which was set in the offices of a Slough paper merchant.

Osama, its Allah you nit, I've come to raise you a bit. In paradise you'll recline, given care, oh so divine, by a virgin whose surname's Lin Bobbit 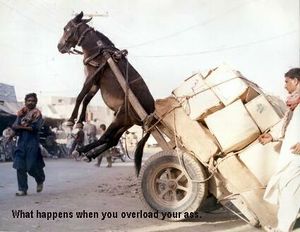 Osama's Ass after a travel incident.

The most important of the great Osama Bin Laden's vehicles. It allows him to travel through Kalashnikov-wielding enemies of Freedom and barren cratered landscapes without getting his dancing shoes scuffed. See also: Osama's Llama

The little known Australian holy man who brought down 10 cases of lager after meeting God on Mount Sinai. Also known as 'Ozmoses' - the Bringer of Amber Nectar Fluids.

2. The last part of a phrase often spoken by a preacher, preceded by "Let"

A path laid out in a bent bone design.

Exercise classes run by or for ostriches

To Oust! something is to get rid of a bad odour altogether, as opposed to covering one up. If you've got a horrible smell in your house, then please, for the sake of smelling nice, Oust! it. Please? Thankyou.

Establishes the closely associated relationship between supervision/management and failure to notice something/omission.

Magical words that if you say them fast enough you will become a Grue!

The notion that everything is googlable.

Etymology: random collusion of letters largely assembled from the top row on a standard keyboard, with a quick detour to the second row before finishing back on the top row. Alternatively it might derive from the Norwegian phrase "Au, i evighed" ["Ouch, in eternity"] – often spoken in attempt to soften the pain of having a bible dropped on ones bare foot without actually cursing.

The correct response to a mad scientist ramming a Grue up your nose; while moaning the world is going to end.

The short form of oxygen.

Where babies come from.

The area where clueless people are standing when they go "oh" when enlightened.