UnNews:Vogons: Earth no longer a planet 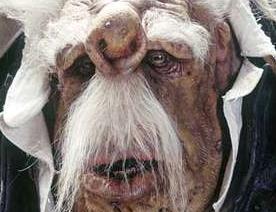 The Vogons have downgraded Earth's place in the solar system.

"Although this decision is by no means unanimous, the Vogons feel that Earth lacks the necessary characteristics to enjoy further classification as a planet," said Prostetnic Vogon Jeltz, a captain with the fleet. "Demolition will begin soon."

"As the proper paperwork has already been appropriately filed, resistance is useless!" Jeltz added.

Debate about Earth's planetary status has raged in the intergalactic community since its construction approximately 10 million years ago. The enormous computer was frequently mistaken for a planet, and at one point was thought larger than Uranus. Further observations, however, revealed that the Earth had a single moon, which made it appear far more massive than it really was.

But opposition to the downgrade of Earth was fierce in some quarters, particularly from hyper-intelligent mice and designers of Scandinavia, with Earthlings also appearing troubled by the decision. Many urged that Earth be moved to "dwarf planet" status instead of being wiped out of the galaxy altogether. Also protesting are the people of Krikkit, who feel that event though thought the game of cricket is a racist game, feel that it is ironically a form of tribute to their war. "I do believe the community may regret this decision and the loss of the excellent fjord design on Earth," said Slartibartfast, an architect and professional designer. "I will, however, submit to the Vogons' decision."

For more fake news on this topic, read:
Experts: Earth No Longer a Planet

Slartibartfast said Earth's major programming may be completed without the planet, although he declined to say how.

Jeltz noted that the downgrade had been discussed for several decades and that plans were available in a nearby star system for review and/or complaint.

"We regret the loss of 6 billion lives, but we can't be blamed if you won't take the trouble to get out and get involved in your neighborhood," he said. "We do feel that this decision will give us a greater understanding of the solar system and make it easier to build future hyperspace bypasses."

Demolition of the planet is expected to begin any minute now. Those who can hitchhike off the planet are urged to do so, but are cautioned not to hitch a ride on Vogon Constructor Fleet ships, as Jeltz has stated that no hitchhikers will be tolerated aboard his fleet, and may be jettisoned or even subjected to poetry.

Unconfirmed reports state that the constructor of Earth, Magrathea, have actually kept an illegally-made backup copy of the Earth. Vogon representatives have said that investigations will begin shortly, but no official charges are being filed against Magrathea.