"Aha! God does play with dice!" The view through Hutchisons microscope.

TORONTO, Ontario -- Ancient Athenians contemplated the nature of the universe, developing many differing ideas and hypotheses. 2500 years later, modern man struggles with the same questions, albeit with the benefit of science. 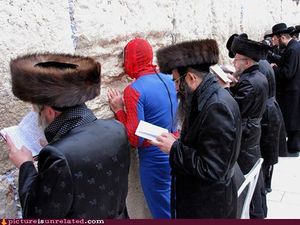 Spiderman attempts to meld with Wailing Wall, but atoms get in the way.

These sorts of weird ideas come rarely, and mostly to pseudo-scientists with scizo-affective disorder. Often it is these "outliers" who dare to synthesize new ways of thinking.

Researcher, bandicoot and rap artist John Kenneth Hutchison has announced a discovery, that proves the universe acts in a random way, much like a dice game. He plans to unite the theories of Relativity and Quantum mechanics to build an anti-gravity car.

"At the smallest scales, everything is made up of dice, and so, everything is random," continued Hutchinson, exhaling a stream of Northern Lights smoke.