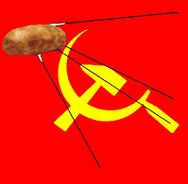 The glorious communist machine has acheieved yet another industrial miracle. Rejoice, comrades!

OUTER SPACE - Today Uncyclopedia successfully launched its first artificial satellite, codenamed 'Spudnik 1', into orbit around the Earth. The spacecraft lifted off from the Uncyclodrome early this morning, and entered what is considered by many to be 'space' soon after. The mission, dubbed "The Long Island Project", has been shrouded in secrecy from its humble beginnings in early 2006. Uncyclopedia n00bs attempting to access the part of the website where highly trained experts were working on the satellite usually ended up being introduced to the business end of a banhammer. Project officials even went so far as to leak false information in order to throw fake news websites off the trail. For example, earlier this year, a project coordinator "accidentally" made public plans that seemed to be for a mass kitten huffing device. Of course, no such device exists, because if it did then the experts responsible for the satellite would have spent all of their time huffing various objects in obscene quantities.

The launch was noteworthy for several reasons. Firstly, it marked the first entirely edible object to orbit the Earth. The potato was selected from over five thousand candidates by a panel of experts who ate the most delicious tuber remaining until this one was left. Thus, it could not prove very desirable for human consumption, although mighty aliens with their lead-lined (or possibly titanium-lined) stomachs might still be capable of consuming it. This initially caused concern that hungry space monsters would discover and devour the spacecraft before it accomplished its mission; however, it was pointed out that after the intense temperatures encountered during liftoff (exceeding 3000 degrees), the satellite would be slightly overcooked and thus not very appetizing. Another reason for the clamor is that Uncyclopedia has now officially won the Online Encyclopedia Space Race. Wikipedia was forced to shut down its "Staten Island Project" and drop out of the race in late 2006 after repeated vandalism by someone calling himself 'SUPAERCOOLSTEVE'. Illogicopedia's ill-fated attempts looked promising until this June, when its "Albany Rapid Transit" program ran into massive banana shortages. Neither Conservapedia nor Liberapedia attempted to join this Race, with Conservapedia officials saying that "it is not the will of God for humans to explore space. Also, we wasted all our money on bullets," and Liberapedia higher-ups claiming that their plans were aborted before they even had a chance. 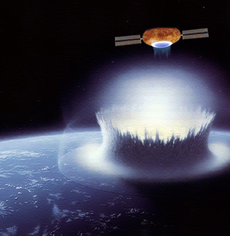 If you see a hot potato coming at you in the next few days...duck.

The purpose of the new satellite is debated by leading experts. As the entire satellite is edible, it carries no electronic equipment of any kind, rendering it useless scientifically. The current working theory is that there is no point to this launch, other than to put a potato into space. Some scientists have noted that the orbiting potato would be able to re-seed bacterial, and perhaps plant life, after the sterilization of planet Earth. Uncyclopedia has denied any plans to direct a gamma ray burst at the Earth, noting that doing so would fry the potato to a crisp also. The only thing that scientists are sure of is the amount of damage the satellite will cause upon its re-entry into the Earth's atmosphere. One expert conservatively put his estimate at "a whole fucking lot". When asked why a simple tuber would cause so much damage, one NASA fun-gineer said "Look, I'm in a hurry here, I have a hot date tonight." Since the concept of any NASA employee securing a date with a woman is laughable, conspiracy theorists think that there may be something that NASA isn't telling us. In any case, experts are now concentrating on more important and puzzling questions, such as "can this be made into a high-budget Hollywood blockbuster?" and "why are all the secret projects named after islands in New York?"