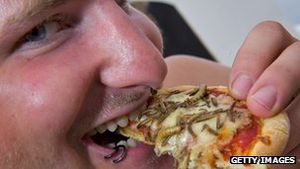 The report acknowledges that a major obstacle is that the photos accompanying stories about eating insects almost always feature a cunt eating something vile looking.

The UN has taken inspiration from bullies all over the world by suggesting poor children should be forcefed insects.

Like some globalised, would-be-benevolent version of Nelson Muntz, the organisation has said cramming the mouths of the hungry with creepy crawlies is the only sensible thing to do.

"Insects are everywhere and they reproduce quickly, and they have high growth and feed conversion rates and.... Sorry, I ... I'll wait for you all to stop retching," said a spokesman at a press conference in Luxembourg.

"The only slight hitch in the plan is that - as is fairly evident today - are you going to... do you need a bag? This man's just been sick... As I was saying, the only problem is, er, some people think the idea is completely disgusting, and it's obviously a challenge to get people to eat food they think is disgusting. But, er, we think that eventually people will eat food that makes them feel sick. Sooner or later. Cause whatever makes you healthy generally makes you sick first. Or something."

UnNews decided to ask an expert, and found Jason Weathercoats, 13, who was attempting to feed 3 beetles and a particularly hairy caterpillar to a small classmate. "The best strategy I have found," opined the young bully, "is to punch them in the guts so hard that their mouths open to cry out, and then to stuff the little critter in. Then clamp your hands firmly around the face - like so - and tell them if they don't swallow it, you're going to light a match on their balls."

As unlikely as the whole thing sounds, it would not be the first time the UN has employed bully-style tactics on a worldwide scale. In 1999 it got its big brother NATO to stick up for Kosovo and beat up Serbia after school, although Kosovo later complained that some of the windows in their parents' house got smashed in the process.