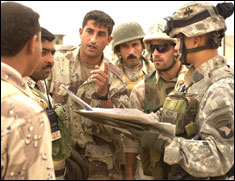 A group of soldiers attempts to satisfy the United States' need for appreciation.

MILWAUKEE, Bermuda -- A report released Tuesday warns that the United States and its armed forces are locked in a co-dependent relationship.

"Americans have been showing their support for the troops with yellow ribbons, bumper stickers, billboards and Lee Greenwood CDs," said Dr. Fred Albitter of the University of Wisconsin-Milwaukee's Center for Addiction and Behavioral Health Research. "Americans are anxious to show they care. But no one can adequately appreciate how much they do."

According to the report, Americans have been showering soldiers with cards, gifts and letters; calling soldiers on the phone all day and night and lashing out at anyone who suggests that the military might need its own space.

Sheila Turner, a 32-year-old accountant from McCandless, Penn., said there was "absolutely nothing wrong" with her concern for the soldiers.

"They just need me so much," said Turner, sitting in a car covered with flags and yellow-ribbon magnets. "I have to be there for them all the time and make sure they adjust to life in Iraq. You see, I'm the only person who really understands them, deep down."

Turner said she writes three e-mails a day to soldiers in Baghdad and sends as many care packages as she can.

"It can be hard, but it's not as hard as the job they have," she said. "Sometimes, though, when I don't get that reply to one of my letters, I know I did something wrong. And I throw myself on the bed and cry."

"The United States called me last night just to see how I was doing, which was nice," Belsko said. "But then America said that supporting me was 'all I live for.' That kind of freaked me out."

Belsko and other soldiers in 101st now spend 12 hours a day making videos to show Americans how much they appreciate their support.

"We've had to cut back on the patrols recently, but you really don't want to be around America when it feels unappreciated," said Spc. Roger Hernandez, writing his 102nd 'Thank You' e-mail of the day. "Sometimes I wonder if America ever sees this excessive care as the symptom of a deeper controlling behavior, but then I get a letter from Tennessee asking if I got the DVDs I wanted, and I have to write back."

America's on-again, off-again relationship with its military has had its ups and downs, but "these levels of co-dependence have not been seen since World War I", said Albert Springman, author of I Need You To Know I Care: The U.S. Home Front, 1917-18, when a "deeply vulnerable" United States reacted to perceived attacks on the armed forces by locking up thousands of Socialists and German-Americans.

"(President Woodrow) Wilson insisted that any criticism of the army, however minor, was a grave personal attack," Springman said. "The Sedition Act of 1918 was aimed at those who didn't understand his bond with the military."

UWM's Albitter said America will have to recognize its own needs and try to satisfy them without smothering the armed forces with affection.

"Americans must understand that they do not have to live for others," he said. "The military are adults who can handle their own lives. By seeking other outlets for their concern, both the United States and its armed soldiers can develop a stronger and healthier relationship."

"You are going to publish this story, right?" Albitter asked reporters. "Because I really, really have to get this message out to America. They really need me."