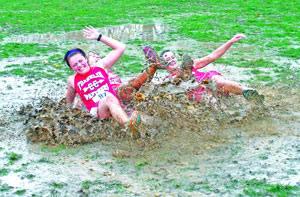 Two Skydivers--Jimmbo and Billy Bob land safely in a mud puddle on their asses.

The plane slowly made its way to the drop location, gaining altitude as it proceeded in its usual fashion. As they had practiced a hundred times before, the two stepped to the back of the plane to put on their gear. Before they had time to grab anything, both tripped and flew out the door--according to the pilot.

One onlooker said, "Ah crap, I peed muh britches, watchin' them boys droppin, an' no chute popped opened up none. And then I realized, they ain't got one."

Just escaping certain peril, the two divers say they kept their cool and aimed for a muddy looking area. However witnesses at the local VFW swear they heard two school girls screaming as if they were falling out of the sky, at the same time this incident occurred. Nevertheless, Jimmbo and Billy Bob landed ass first into a mud puddle, thus saving their lives.