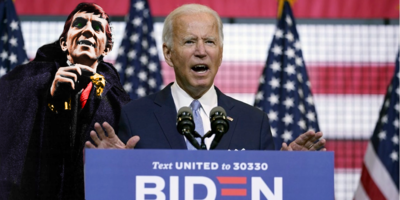 "Sleepy" Joe Biden is "being controlled by DARK SHADOWS," Trump has alleged on several occasions.

While most people assumed he was demanding that states stop counting 2020 election votes, Trump waited until Tuesday to clarify his tweet.

In his follow-up tweets, he wrote:

"Allemachtig!" he cursed in Dutch. "Where do I even begin? First of all, Mr. President, I have never in my life met David Lee Roth or banged ze ladies. I can't even play the neuken guitar. You seem, how you say, poorly educated in your geography, I must say. I do not believe Dark Shadows has been on the air in America since the Bill Clinton administration. The President of the United States is calling for the extermination of several fictional characters, one of whom is a Star Wars character who isn't even a vampire. Who the neuken is Monty Sisqo? Does he not review films or write musical compositions about thongs, or perform British comedy? I'm fairly certain, Mr. President, that neither Count Basie nor Countess Vaughn are creatures of the night. At least you're right about Nosferatu, or as he's known in the mortal world, Rudy Giuliani."

Van Helsing added, "What the point of all this malarkey? Vampires are fictional, except for Republicans. Hell, even I'm fictional! Besides, Halloween is over."

Trump has yet to respond to Professor Van Helsing.