UnNews:Trump denies extraterrestrials are interfering with US elections 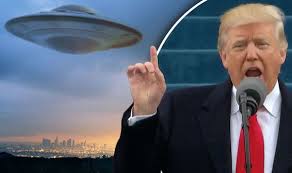 Yet again, the Trump administration is fending off a new wave of undeserved attacks by the liberal media: claims of extra-political deal making which may undermine Earth's fragile independence.

WASHINGTON, DC: Responding to reports of alleged UFO sightings by the US Navy over the past several years, President Donald Trump elaborated on his unofficial speculations on whether or not aliens from other worlds are illegitimately influencing the outcomes of federal and local elections for their own nefarious purposes.

In an exclusive interview with ABC News (to which UnNews reporters were explicitly denied any sort of access for national security reasons), Trump rambled on and on to the legendary George Stephanopoulos about his grossly unfair treatment at the hands of everybody who were out to get him; namely, everybody. Aliens from extraterrestrial civilizations were notably missing from the President's never-ending list of political (and personal) enemies. "Look I can see how where space guys from Skrooz 9 might have big things to gain by what they could do on us with their huge ray guns", Trump rambled, "but such bad stuff if you call it that would not sit well on their home turf, think on that George for a change, huh?"

In response to Stephanopoulos's follow-up questions on the incriminating appearance of double standards by his own administration, Trump waved him off mid-sentence and went on to articulate "Look we got no good point to go muck with in what far out weird worlds do when they stay at their own home I think but we got to be sure that we check in with Mike on that. Not like how we could know or not know if we think we had to make sure we could do that sort of stuff to them if you can get what I mean. Get this, we are HERE and all their base are THERE, too far too much much too far, I can see that, can you see that now George you big dumb dolt?".

While it is not immediately clear what sort of immediate benefits extraterrestrials could possibly derive from secretly assisting the Republican Party in gaining such enormous electoral victories at the expense of Democrats, it is evident that Republicans in general are certainly not complaining about the situation. Extreme leftist conspiracy theorists hypothesize that Trump's recent offer to shield illegal aliens from other planets from recently-implemented deportation laws may be an indication, not of simply extending a rare olive branch to liberals, but of deep collusion with potential interstellar invaders. However, evidence is currently lacking on exactly which political party extraterrestrials in general intend to support in the upcoming 2020 Presidental election.

To cap off the perfect interview, Trump threatened Stephanopoulos and all of ABC with a retaliatory tweetering of such thunderous magnitude that the world will never forget. Just before kicking him out of the Oval Office, Trump asked "Hey George how do you spell your big last name, huh? Well I guess it would spell like it would sound so I think I can just make it up when I tweet like hell on your fat ass, you will see you all see you big dumb dolt!".