UnNews:Tobacco picketing found to be addictive

UNIVERSITY OF WISCONSIN, Madison, Wisconsin, United States - In a resounding victory for tobacco lobbyists the world over, one study released recently by University of Wisconsin professor Gregory K. LaGrange says that picketers that tout the "Smoke-Free" initiative are, in fact, addicted to the act. After several years of agonizing study of one such group, "I Don't Smoke Because I'm Not a Prick", LaGrange feels he can definitively say that prolonged exposure to the "vibes" given off by picket rallies against tobacco companies often is addictive.

Also a part of the study was the similarly shocking fact that many of the addictive substances are also quite dangerous to health. "It has been discovered that anti-tobacco signs contain over 1,000 airogens - that is, airborne particles - that are released into the air when shaken, several of which are toxic. In a high-picketing environment, this can lead to the inhalation of these airogens at a level far higher than is safe," LaGrange said.

"Many picketers find their first experience with the act quite unpleasant," adds the co-author of the report Frank Delaney, "but press onward despite their misgivings due to peer pressure. Eventually, the airogens that dissolve into your bloodstream make their way to your brain, where they begin to dissolve your common sense receptors."

"Eventually," he states gravely, "all you know how to do is eat, sleep, and picket." 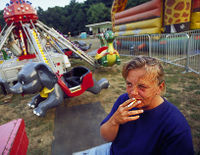 A saddened smoker looks with pity upon the picket line, whose health is so fragile it would be irresponsible to reproduce a picture of it.

The release of this report comes at an opportune time for tobacco lobbyists, whose backing companies are beginning to compile their quarterly reports. A spokesman for one international company, the Altria Group (a subsidiary of which produces the ubiquitous Marlboro), said,

Members of I Don't Smoke Because I'm Not a Prick, meanwhile, are angry with what they call "dirty rotten fucking lies" on the part of the scientists at the University of Wisconsin. Between bouts of coughing, lead picketer for the White House in the morning Maria Gangrel said, "I don't care what they say. I can quit whenever I damn well please, I just choose not to! Don't fool yourself, I lost my family, friends, several fingers to amputation, and the good years of my life because I wanted to!" She then proceeded to cough all over this reporter.

This, the researchers claim, is perfectly normal. "Denial is the first stage in acceptance," says LaGrange. "They will throw themselves even farther into the activity they cannot get away from. When they are ready to better themselves, I hear talk of new pharmaceuticals coming out to help them." Indeed, there is currently a "Allow Smoking" patch awaiting speedy FDA approval for over-the-counter sale. Wall Street - and the people in Wall Street rallying against it - wait in anticipation.

LATE EXTRA: It is currently being reported on the wires that an organized demonstration of Smokers Against Picket Signs has congregated outside the U.S. Capitol Building. The message of their rally is reportedly that "the continued production of dangerous picket signs at the hands of the big corporations is both irresponsible and immoral." In perhaps the most ironic press release ever conceive, SAPS charge the huge corporations with being in it simply for monetary gain. They show no signs of respite from their cause. More on this as it develops.