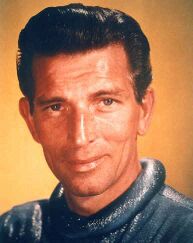 The time traveler as pictured yesterday. Apparently there's some big '50s revival going on in the year 3000.

NEW YORK, New York -- The United Nations General Assembly met today to heed the warnings of time traveler from the year 3000 known as Beta Orange 724. After meeting with Secretary General Ban Ki-moon the silver jump-suited ultraquantum physicist approached the podium and delivered his dire warning to the people of the present.

"People of the distant past!" he said, "The way ahead of you must seem long and dark. But have no fear! All will be well so long as you bear in mind the warnings of your distant descendants:

"Firstly: ensure that your diet contains high levels of fiber. This will aid digestion. Remember, look after your bowels and they will look after you.

"Secondly: scissors! Do not run with these implements, nor should you skip, hop or jump while holding them!

"Thirdly: a strong future will depend on an well educated population, so no TV until you've finished your homework!

"Fourthly: to create future generations you must breed. For achieve this, you will need to be clean, well presented and polite. Guys, when going on a date, go up to her door and knock, don't just sit in your car and sound the horn. Girls, don't complain too much about the cheap corsage, he's probably trying his best.

At this point several of the delegates stopped listening patiently, and began asking questions of Beta Orange 724. Questions were asked about what do about terrorism, AIDS, the water crisis, the food crisis, peak oil and global warming.

"Global warming?" replied the traveler, "Haven't you got that solved yet? Holy crap, isn't this 2050? It's not? Then when am I?

"2008? Holy fuck, you people are screwed! I mean, like, totally fucked! Jesus, I'm in so far over my head! I'm going to go help your grandchildren fix their trivial little problems.

"Enjoy twenty years of soul-crushing horror, retro-dorks!"' he concluded, as he touched a button on his belt buckle and vanished.