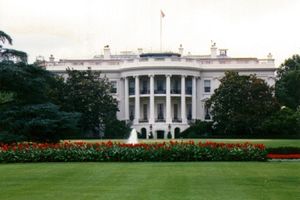 WASHINGTON, D.C.--A startling discovery was made today, as contractors hired to give the White House a fresh coat of paint inspected the building. They found that the color the White House is currently painted in is actually a subtle shade of off-white, instead of white, which the name "White House" typically implies. This oddity has caused an outbreak of campaigns to change anything from the color of the great house, to the name of the great house. One group even suggests that the White House be destroyed. "Burn the truth! Burn the TRUTH!!!", one supporter said. Currently there are several opinions on what needs to be done.

See the difference! There really is one, I swear!

Even a gay rights group wants in. "Painting the White House rainbow would be simply fab-u-lous!", states Lance Lovely. Regardless, most people feel the gay community has little chance of getting what they want. They believe Senator Craig pretty much ruined any chance the gays had.

Military experts want the house painted green and renamed "Just Some House" so that it blends in with the grass, making it more difficult for terrorists to crash a plane into, and much less tempting a target.

Others believe the White House's color should be left alone. "No one noticed it wasn't white before this, why not just keep the color the same?", some person said, "We could rename it the Off-White House. Now that has a nice ring to it!" But, many people feel renaming the house is not a viable option. How would you like to walk into a store in DC, looking for postcards of the "Off-White House", only to find cruddy White House cards? That wouldn't be very pleasant. Or if someone is asking directions to the "White House", and you give them directions to a white mansion owned by some rich snobs across town. THAT would suck! The future of the "White" House remains uncertain, but one thing is for sure. Despite what the gay community wants, it will not be painted rainbow. That would just be gay.

Featured Article  (read another featured article)
Featured version: 1 October 2007
This article has been featured on the front page. — You can nominate your favourite articles at Uncyclopedia:VFH.