UnNews:Should we send Bowe Bergdahl back? 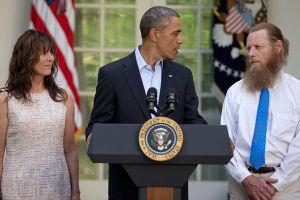 The tense moment when President Obama mistook Bergdahl Sr for a terrorist.

US Sergeant Bowe Bergdahl has been released five years after being captured by the Afghan Taliban, but the exchange has proved so controversial that some commentators are demanding he be sent back to Afghanistan.

Here, UnNews looks at the key issues surrounding the scandal.

Traditionally, because the US is such a bad-ass country, it secures an excellent exchange rate of prisoners of war. During the Cold War with Russia, the US averaged 2.14 American soldiers for every Russian soldier it returned. This led to the famous Russian Reversal joke: "In the USA, you return Russian prisoners. In Soviet Russia, Russian prisoners are returned!!!" Russian Reversal jokes never got any better than that.

The Bergdahl exchange completely turned the tables on the Americans, suggesting the going rate was five Afghanistans to the American. As one commentator on Fox News pointed out, if the entire US army in Afghanistan was captured, it would now require the return of 50,000 Afghans from Guantanamo Bay, which would have serious effects on the prison choir.

When his son was captured, Bowe Bergdahl's father began growing a symbolic beard to mark his absence. In the five years that have since passed, the beard has reached a prodigious length and wingspan, but unfortunately gives Bergdahl Sr a curiously Muslim look. (See right.)

Related to this, Bergdahl Sr sent a message to his son during a ceremony in the White House, but chose to say it in Pashto - the language of his son's erstwhile captors - and later explained that his son is "having problems" communicating in English. A poll on ABC News showed that 9 out of 10 viewers said this "reminded them of some shit out of Homeland."

Built into the notion of the US as a pioneering country is the Wanderer, the rootless, rugged individual who hitches rides, jumps trains, and follows his destiny just about anywhere it may take him. During his time in the army, Bowe Bergdahl showed much of the wandering instinct, but unfortunately, within a military context, it looked curiously like half-hearted attempts to go AWOL. His hometown, Shidkika, Iowa, was preparing to welcome Bergdahl back with a grand ceremony - having been mobilized by the slogan, "He fought for us, let's fight for him!"

This has since been modified too, "He seems to have gone missing in curious circumstances, let's do the same!"

5. Negative consequences of a military trial

Due to these accusations, some commentators have called for Bergdahl to be put on military trial, but there is concern that it could be both a costly procedure, and one which will draw negative attention to the US military. Ross Limbo summarized the feelings of many when he said, "It's all a little too ambivalent at the moment - we don't know what he did and what he didn't do - and the trial would accordingly leave folks with mixed feelings.

"The safest thing to do till we know where we are with all this is just to send him back to camp."