UnNews:Selma Hayek: "My breasts are God's gifts to men" 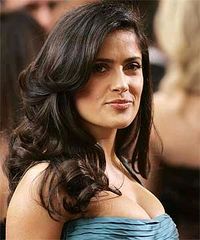 BEVERLY HILLS, California -- Selma Hayek claims that her breasts are God’s gifts to men. The Mexican actress was flat when she was younger, but she prayed to God for a bigger bust. A month later, she visited a church in Cancun, where, allegedly, the Virgin intercedes with God to work miracles. She bathed her chest in holy water and asked God to “make ‘em sprout!” Within seconds, her breasts grew so much that she went from wearing a 28A- to wearing a 38DD-size brassiere. “God is good,” she says.

Her breasts are the envy of women the world over, and many men long to accept these “gifts from God.”

She says that other female celebrities also owe their “big boobs” to divine intervention. “I won’t mention any names,” she says, “but, if I were to do so, Dolly Parton’s might come to mind, along with Jennifer Love Hewitt’s.” Their breasts are “divine,” too, she admits, “but not as divine as mine.”

God has been less inclined to bless other actresses with “big, beautiful boobs,” she suggests, citing Sarah Michelle Gellar, Alyson Hannigan, and Michelle Trachtenberg as women whom God, apparently, has “cursed,” despite their Jewish ancestry. She says she has “no idea” why God would bless some women and curse others, but she believes that “God is definitely a breast man.” She is convinced that “God likes big-breasted women” and that “both Eve and the Virgin were almost certainly big-breasted.”

Initially, she confided in Unnews’ reporter Lotta Lies, “I thought that God wanted me to share my breasts with men in a physical manner.” Since then, she has come to believe that God wants her to do no more than to “let guys have a peek” at her breasts, which is why she plans to appear topless in future films. “It’s not gratuitous nudity if God commands it,” she argues, “and appearing topless could boost my career, too, which has been flagging lately.”

Hayek suggests that any girl or woman who is dissatisfied with her breast size appeal to God for help before undergoing breast-augmentation surgery or hormone therapy. “Praying to God might even work for transsexuals,” she says, “since God is no respecter of persons. It’s worth a shot.”

Reportedly, Gellar, Hannigan, and Trachtenberg said that they are considering converting from Judaism to Roman Catholicism and appearing topless or even completely nude, “if God will give us hooters.”