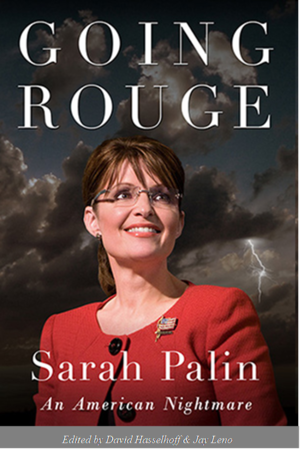 The cover of Sarah Palin's newest book, Going Rouge, which garnered positive feedback for its use of complete sentences and proper grammar.

ANCHORAGE, Alaska -- Sarah Palin begins her whirlwind tour of her newest book, fittingly titled Going Rouge. Sources tell that it was originally going to be called Story of an Average Maverick Hockey-Mom, but Palin refuted that title, calling it "anti-un-Americana" and that it should be given a title that "more better reflects the constituent constitutional freedoms this country's Constitution has provided". Thus, the name Going Rouge was born. Palin received much media attention from the paparazzi, who claimed that she had misspelled Rogue with Rouge. In written statement, Palin asserted the following:

The following day, Palin started her tour in Sea World, where she lectured on Tea Party values in front of a crowd of innocent senior citizens, to which they burst out in glorious applause, and then commenced to singing the Star Spangled Banner in Russian and in Newspeak. It is reported that the Beluga whales behind her protested, in which Sarah Palin glared them down with her evilness. The belugas did not survive the encounter. 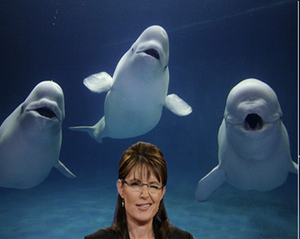 The final moments of the Beluga whale's protests.

The book has already received positive critical analysis. Oprah Winfrey has added it to her list of "Books Woman with No Lives Have to Read (if they can read)". David Letterman wrote a rave review, saying that he "was appalled and amazed at Palin's masterful use of complete sentences and punctuation". Barack Obama and Joe Biden crossed party lines in their reviews, both stating that they were "impressed... by Palin's ability to use proper grammar". 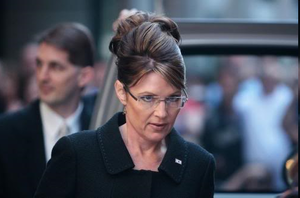 Sarah Palin commencing with her evil stare. It is 100% fatal for all who view it. Only Chuck Norris survived to tell the tale.

Most exciting in Going Rouge are hints of Palin beginning the Maverick Party. Palin, in a quote from the book, says the following:

Whether Palin decides to act on this is yet to be known. Check the Internet to see when Palin will visit your community (so you can prepare yourselves).

Palin's book is to be released in the near future. It is being translated into English at this very moment.