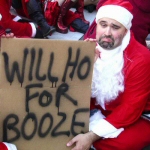 LAPLAND, The Arctic -- Children around the world were shocked today to learn that Santa Claus, aka Father Christmas, has been forced to sell his winter wonderland in the Arctic and relocate to a badly painted portakabin in England. Sources close to the genial, rotund philanthropist have revealed that the recent collapse of Icelandic banks and the ensuing global slowdown has hit Santa severely in the sacks, and a scaling down of his long-running present donation service was inevitable.

The rosy-cheeked altruist's latest base of operation is rumoured to be in Hampshire's New Forest, where the climate differs slightly from the brightly-lit, snow-covered ice palace that Santa used to call home. Winky, an elf who wished to remain anonymous, confirmed that conditions in the new workshops are disappointing: "There used be about 1,000 of us working in a brightly-lit hall, and the atmosphere was fantastic", he enthused, "But now we're down to just 3 genuine elves and about 2 dozen illegal immigrants dressed in duvets. We work a 16-hour day and have to make do with Tizer instead of egg-nog and brandy to keep our spirits up." 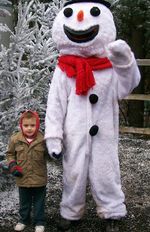 Our disguised reporter poses with an elf

Secret filming by visitors who paid over £30 each to visit the grotto suggests that even the reindeer have been down-graded. Dasher, Prancer, Donner and Blitzen have been replaced by 4 Guernsey cows with antlers nailed to their heads, Schnitzel and Noodle are pantomime horses and Rudolph a cardboard cut out with a red light sellotaped to his nose.

Suzie Moonraker, of Blandford, Dorset, who visited the park with five-year-old daughter, Noelle remarked "It's disgraceful. I was promised a magical Christmas experience, but all I got to see was a couple of chihuahuas pulling a sleigh and some pikey snorting "snow" round the back of the nativity scene. I brought my daughter up to believe that Christmas is a traditional time of excess and free stuff, and now the illusion is ruined for her. I've a good mind to punch Santa on the nose to show him what the festive season is really about."

Visitors also report that the illuminated parade consisted of 3 papier-mâché penguins and a plastic polar bear on a tractor trailer, and the carol singers were X Factor rejects accompanied by a child sex-offender on a ukulele.

Dorset trading standards have received a deluge of objections since the portly benefactor moved onto their patch, and several local residents have complained of a shortage of flour and baking soda in shops, as Santa's "special effects" experts attempt to recreate a frosty environment. Ringwood grocer, Arfur Pound, has welcomed the new arrivals and reports a 78% increase in the sale of sherbert fountains. "I mean, it's just market forces, plain and simple, isn't it?", he said, "If I don't sell 'em, then Tesco will, and then the UK will just be one giant supermarket. I say good luck to Santa, and if he's listening, my boy would like a PS3 and a subscription to 'Guns and Ammo'."

Santa Claus, the face of Coca Cola since 1934, was unavailable for comment, but his "spokesman", a large, burly man in a dark suit and sun-glasses who refused to be named simply remarked "Move along now, there's nothing to see here" before bundling our reporter out over a polystyrene model of a fence.

Featured Article  (read another featured article)
Featured version: 13 January 2009
This article has been featured on the front page. — You can nominate your favourite articles at Uncyclopedia:VFH.