UnNews:Rams bar athletes in Cincinnati from playing in Super Bowl 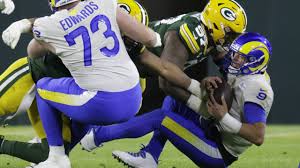 The Rams are really hoping to not join the Pats and Broncos with V Super Bowl Losses.


Inglewood, CA — With the Inglewood Rams' victory over the Santa Clara 69ers, a guardian angel has taken it upon himself to try to save the world. The ongoing existence of another flu has prompted Inglewood Rams owner Sir Stan Kroenke to try to stop filth from infiltrating the Union's most profitable state during the upcoming Super Bowl. Let's hope he's successfull:

“Since we can't legally force athletes to wear N95's, or shave their beards, or educate our politicians, out of an abundance of caution, we will instead require that anyone stepping onto our playing field first purchase a "Grass Pass". This is just as reasonable as the vaccine passports that everyone in the world supports. Anyone, regardless of vaccination status, is eligible for these Grass Passes, which only cost $1.05. Also, since this is apparently not against any rules and Totes McGotes cool with the NFL, Grass Passes are only available for purchase to those with credit cards billing to the Greater Los Angeles region. We're sure you understand.”

No Fun League Commissioner-Dictator Roger Goodell said that just like when they stuck it to St. Louis and San Diego, he fully supports everything Kroenke does.