CHICAGO, Illinois -- Future President Barack Obama announced this past Saturday that he has resigned from his church where many controversial sermons by his former pastor and other ministers have been given. Obama said he was resigning "with great amounts of sadness."

"This is not a decision I come to lightly," the future President said. 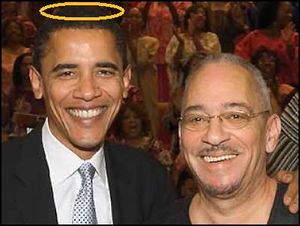 Obama with his former reverend of over 20 years.

President, I mean, the future President was a member of the Trinity United Church of Christ in Chicago, Illinois, for over 20 years. In that time, the church has become a beacon of hope]hope] and equality to all of its members thanks to the array of inspirational speeches given by the recently retired Rev. Wright. In the speeches, Wright often talked about finding the cure for AIDS, among other topics.

"It has been a long change in the making. I've been with the church for 20 years, after all, but I need to show my public that I can change, unlike a certain opponent of mine who hasn't left her church," future President Obama said in a statement Thursday.

In a related story, the Church of Satan has announced it is endorsing Obama. The church's leader, who has chosen to remain Anonymous, told FOX News, "Obama is a great man. We wish to help him grab the Democratic nomination from that bitch. And now that he has denounced Christ, this is the perfect time to endorse him."

It is still unclear if the Church of Satan's earlier endorsement of John McCain for the actual presidency still stands, though I personally, as a journalist and as the writer of this article in which you are currently reading, assert my unsupported belief that it does.