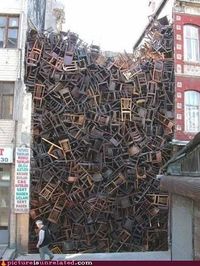 Our editors doubt that this picture was taken in Belgium. It looks more like Indonesia to us.

"It's a bit cramped indoors, actually," said Carroll McMustang of the number one architectural publicatio in the world, Florid Mensch. "But the exterior is what's really interesting, though. It looks like a pile of old chairs, stacked between two buildings. Lars brings both irony and sarcasm to his study because it is actually just a pile of chairs."

"Of course, you can't actually live in it," commented Belgian Minister of Random Occurrences Henri Prepuce, to no one in particular. "We Belgians are very proud of our architects and our beer. This prototype is not so much an actual house, as a disturbed man's idea of a house, brought to life. Even better, he conceived of it while drinking copious amounts of Abbaye St. Martin triple."