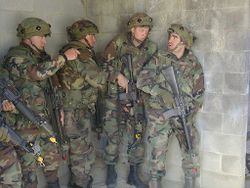 "Fuck this for a game of soldiers!" - Britons, about to commit an Act of War this morning

ARMS-AKIMBO, UK -- ALMOST TWO-THIRDS OF BRITONS regularly commit Acts Of War, according to a report, challenging the notion that the country is made up of a peace loving, non-violent majority. A survey by researchers at Buggerole University found that 61 percent of people they questioned had committed one of a variety of "Acts of War".

These ranged from invading small countries for their natural resources, ethnic cleansing and launching medium range ballistic missiles on civilian populations. Of those who confessed to committing "Acts of War", 62 percent said they had initiated three wars simultaneously while 10 percent admitted to engaging in genocidal activities.

Frank Hushaine, of Lewisham, was unapologetic when asked why he advocated a life of war, "I have a wife and kids to feed, not to mention an army of 200,000 that I keep in my garden."

The report, based on a survey of just over 7 people aged 25-65, said the findings cast doubt on what politicians liked to describe as a "peace loving majority".

"Although the middle classes are engaging in this type of behaviour, they are also eager to blame when they themselves are invaded, annexed or bombed" said the report, published by the Centre for Big Guns at Jalloppy College, London.

As for Frank Hushaine, he is intent on continuing in his War mongering, "only last week I invaded Poland and plan to be in Moscow by Christmas."