UnNews:Mitt Romney drove to Canada with his child on the roof 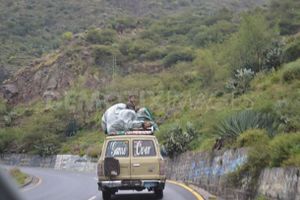 Grand Bend, Ontario -- The story hasn't come up yet on the campaign trail and not even in any of the debates which sometimes border on the ridiculous anyways but in the summer of 1983 Mitt Romney drove 12 hours from Boston to Grand Bend with his 2-year-old son on the roof. The incident ,which was outlined in his manifesto, includes details of his family life with his wife and 5 sons. The incident, says Romney in his book, was meant to illustrate his emotion-free crisis mangement. Emotion-free crisis management is believed by Romney to be a great trait of a potential president. Critics believe it is a strong indication of psychopathy.

It started when Romney was loading up his family's SUV for a trip to the cottage in Southern Ontario in 1983. Romney packed 4 of his kids, most of their belongings, and his wife into the vehicle but discovered that there was no room for his youngest son. Always a quick thinker, Mitt loaded an old dog carrier on to the roof of his SUV and locked his young son in it. His son apparently was not able to hold his bowels and bladder during the long 12 hour drive to Ontario. Mitt reacted calmly and pulled into a service station, pulled off his son's soiled clothes, and hosed down the vehicle and his child. The child was then forced back into the carrier naked and freezing from the ice cold water. The child also allegedly suffered from moderate frostbite because of the chilly Canadian evenings and the fact he was soaking wet. Most of Canada suffers from an Arctic or Sub-arctic climate and temperatures rarely stay above freezing at night, even in summer.

This incident is kept under wraps by the Republican establishment who have already anointed Mitt Romney as their chosen candidate to run against Obama in 2012. Even mention of the incident in the United States by major media outlets can result in the firing and possible imprisoning of those involved. Canada, with its free press and free speech, is able to clearly report what has happened and inform the public of Romney's cold hearted cruelty towards his own children. Because of the internet and children's rights organizations, word of this incident is slowly seeping into the United States. It is not known at this time how much of an impact, if any, this will have on Romney's election prospects. 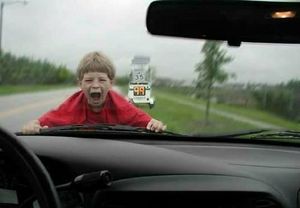 Pundits on both sides of the border argue that even if knowledge of this incident becomes well known south of the border, it likely won't hinder his election prospects. Rick Mercer, a popular Canadian pundit and homosexual, argues that most people who are against child abuse tend to vote Democratic or not vote at all. "This will not hurt his chances, if anything it may even improve them" says Mercer. Republicans and their allies have long been known to be firm supporters of child abuse as a way to instill discipline and respect into their children.

Naturally the left wing has reacted with fury and outrage. People for the Ethical Treatment Of Children is one of most vocal of these groups. "You wouldn't do this to a dog, let alone a child, what the hell was this man thinking. I think that this incident is tantamount to torture" says Ingrid Bergman president of PETOC. Filmmaker Michael Moore called this incident appalling and believes that Romney should be up on charges.

A police officer who is a close friend of Romney stated that even if charges were drawn up, the statute of limitations has long ran out, the alleged incident took place almost 30 years ago. Besides, the officer who wished to remain anonymous, said he has done far worse to the occupy protesters. "If Romney was charged for what he did, imagine what would happen entire police forces across the country, I wouldn't even want to think about it".

Right wing groups and other Republicans have applauded Romney's cool and collected response to the cramped car and his son's lack of potty training. "If he's this tough on his own kid imagine how tough he would be on the terrorists" said former President George W. Bush. "Crime will never be a problem again" said former New York mayor Rudolph Guiliani. Even former candidate Herman Cain has thrown his support behind Romney after learning about the incident from UnNews reporters, "We need to get this man in right now, they should just skip the election and swear him in immediately".

It appears that despite the nation-wide media blackout on the incident, many politicians and organizations already know of the incident. Their opinion on it seems to be divided almost exclusively by party lines. Democrats seem more energized to vote just to avoid a Romney presidency. Republicans are becoming more energized and in favour of Romney as they slowly learn of what took place almost 30 years ago.

As for Romney's son, he recovered from the frost bite and grew up to raise his own family. He owns a large cotton plantation in Georgia where his 6 children, all under the age of 12, are employed full time as cotton pickers. He says he instills values such as discipline, respect, and hard work into all of his kids through regular beatings and whippings. Asked by UnNews if his dad's cruel treatment of him as a child screwed him up in anyway he responded "Absolutely not, my father was a great man and if it wasn't for him I wouldn't be the person I am today". Most Republicans agree with Romney's son and it appears to them that this incident will not hurt Romney's campaign. Whether this is true or not, only time will tell.