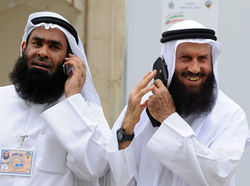 The main difference between the Saudi version and its American counter-part is in the production. In the American series they were just acting. But in Mecca Vice they film live in real-time as they bust and murder possibly innocent sinners.

Mecca Vice stars two 'cool' undercover Mutaween, named Ali and Farook, both extremely handsome, well-dressed and religious, who live on a boat in the dessert and keep a pet Blue-ringed octopus named Jihad.

The primary plot has the heroes setting up and arresting the wicked, then torturing and killing them -- but you never really know if it's for real or not. Highlights of the show often include live beheading and limb severing with instant reply.

In many episodes the heroes, “Tubbs” (Ali) and “Crockett” (Farook), have been praised for their heroic crusade against vices in Saudi Arabia. Some of the most popular shows include,

Already starting its 8th season, the show remains the most popular Saudi TV show, and has made a serious impact on Saudi fashion and style.