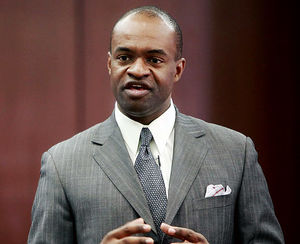 DeMaurice Smith is the early favorite to grace the cover of Madden 12. If he is selected, he will be the first non-athlete on the cover since John Madden in 1999 and the first asshole since Brett Favre in 2009.

MAITLAND, Florida -- EA Tiburon, the videogame studio most noted for its Madden NFL series, has announced the inclusion of an all-new “Lockout Mode” in the upcoming Madden 12 due out this August.

“We’re really excited about it,” said EA Sports spokesperson Donny Moore. “After all, this is the first major change we've made to the game since the inclusion of football in Madden 1994, and the first improvement we've made since getting rid of John Madden in Madden 07.”

The new Lockout Mode will take the player through all the excitement and intrigue of the legal proceedings that have characterized professional football since February, Tiburon and Moore promise. Players will be able to assume either the role of the NFL’s 32 owners and their legal representatives or that of the now-decertified NFL Players Association and their own team of legal representatives, all of which will be rendered with the same graphical engine Tiburon developed for Madden 10 nearly three years ago.

“Tiburon is really serious about bringing a level of depth, realism and immersion to all levels of the NFL’s labor negotiations,” Moore said. “Gamers are going to be able to step into the shoes of guys like Harvey Goldman, the lawyer of New England Patriots owner Robert Kraft, and deliver injunctions blocking the NFLPA's antitrust lawsuit while simultaneously countering objections from the NFLPA’s legal team. If Goldman runs into trouble, he can audible out of a legal motion using genuine legalese by pressing the X button. Fans will even be able to control how Goldman signs legal documents with the brand-new EA Sports Signature Stick™.”

Moore also covered the playing experience to be had by fans that opt to play as the NFLPA.

“For a real challenge, play as former executive director of the NFLPA, DeMaurice Smith. Explaining the complex legal machinations involved in things like union decertification and antitrust litigation to football players is about as challenging as the game will get,” said Moore.

The exciting new courtroom experience Madden 12 boasts won't be focused exclusively on lawyers, however: Moore and EA Sports promise the game will allow fans to step into the shoes of the NFL players filing the antitrust lawsuit as well.

“Guys like Drew Brees, Peyton Manning,and other current players of equal legal expertise will be playable as well,” continued Moore. “As Brees, for instance, a player will be able to cough quietly by pressing A, clear his throat by pressing B, and nod in an act of feigned attention or understanding by using the right analog stick. Manning’s controls will be the same, except pressing Y will allow him to leave the courtroom to go to yet another commercial shoot.”

In addition to the changes made to the core gameplay, Madden 12 will feature over 600 new paper-shuffling animations, the officially-licensed likenesses of all 260 lawyers involved in the lockout’s legal proceedings, and a hard-hitting set of new courtroom gavel physics. Announcers Cris Collinsworth and Gus Johnson will also be returning to provide trite, repetitious and infuriating commentary.

Tiburon also plans to further develop and tweak the game as the lockout continues.

“In the event that there’s no breakthrough at all come August, we’re in the process of building in a game mode that will allow gamers to assume the role of unemployed NFL players and find work outside of football. Chris Johnson’s 99 speed rating and lack of a college degree would make him an ideal cart boy at a local supermarket, for instance, while Tom Brady’s 99 hair rating loans itself very well to doing shampoo commercials.”

Madden 12 is scheduled for a late August release. NFL football or not, Moore and EA Sports promise this newest installment of Madden will be the best in years.

“We feel the new courtroom setting and legalistic maneuvers will bring a level of depth and excitement football hasn't seen in a long time,” Moore said. “It’ll be like being right in the huddle, if the huddle lasted for months and months and months.”

Featured Article  (read another featured article)
Featured version: 5 April 2011
This article has been featured on the front page. — You can nominate your favourite articles at Uncyclopedia:VFH.