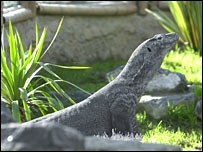 Statues of the virgin Flora have already been erected around the globe.

CHESTER, England -- Scientists working in Chester Zoo recently witnessed a virgin birth that could only be the second coming of our lord, Jesus Christ. While scientists desperately tried to assert that the pregnancy was due to a process called parthenogenesis, they were quickly burned at the stake. Shock and awe has spread across the globe as news spread of never-fertilized Flora, the Komodo dragon, and her delivery of the Second Coming of our Lord, Jesus Christ. Non-heathen nations are beginning to question whether this meant humans had lost their place as God's chosen creature.

Local Anglican vicar Peter Alton is sceptical: "What I want to know is, who will get into Heaven now? Will people still be eligible or will it now be strictly for lizards - and if so, will they be putting the lizards in with the people already in Heaven? Either way this sounds like it's breaking the initial contract and I will take this to court if I have to."

The world of Christendom has been turned upside down. Vatican spokesman Fr. Martin Buber proclaimed the blessed event a , "green, lizardy miracle!" Evangelical Christians have become 40% more delusional. Lutherans are nailing things to doors with abandon. Baptists imitate iguanas swimming in baptismal pools as they are "resanctified by the return of the Lizard Jesus". Jehovah's Witnesses are taking up residence in South American rivers.

Buddhists, Jews, Muslims, Hindus and Athiests everywhere are all having a really good laugh at the expense of Christians.