UnNews:Liberals force their own children to smoke the pot, blaspheme 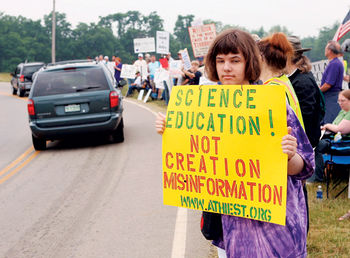 A typical stoned child touts "athiest.org", a web site for atheist elementary-school drop-outs, which seems to have been discontinued.

PETERSBURG, Kentucky -- Local tourist hot spot and truth-seekers' paradise, the Creation Museum, was viciously attacked today by drugged, helpless children operating under the influence of their liberal, God-hating parents. Boldly standing on God's public lands, they gathered today just outside the museum entranceway, holding atheist placards pleading for the righteous to turn away from the Lord and His Word, The Holy Bible.

Although this reporter was unable to obtain bodily fluids for testing, he is certain from her look, dress and manner that the girl in the photo is stoned high on marijuana. Her shameless parents not only dress in tie-dye outfits, wear long hair and chant hippie slogans, but force their children to do the same. The evidence is clear in the face of this poor, doped-up teenager.

Her name is Sunshine Casey Windsong-Lotus Blossom (pictured holding sign), and her predicament is dire indeed. Bullied in a heathen society by schools, media, forced to read books, and brainwashed into disbelief by a horrible mother and father, she is the very image of of a lost child. These unpatriotic granola-munchers have not only programmed their daughter to be a progressive robot, but trained her to think that her beliefs are her own, and she is on the side of the "good".

When asked by this reporter to share her story, little Sunshine put on a brave front and lied for her parents irresponsible behavior, saying, "Smoke weed? Nah, man, it's just really early, and I was up till 3:00 playing World of Warcraft."