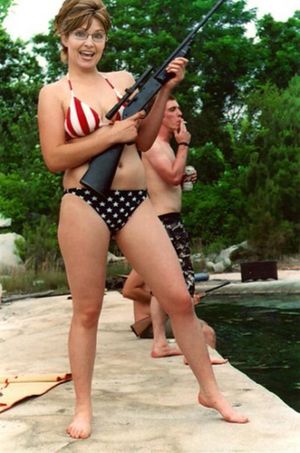 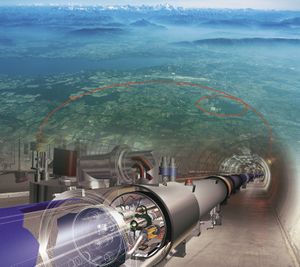 A controversial and divisive thing

Switzerland, Thursday Following hours of sometimes tense discussion, officials of CERN and the Republican Party announced that the LHC and Sarah Palin will be joining forces in an attempt to scientifically create the most LOLworthy japes of all time.

"By God, is something so funny truly possible?" asked humorous monologist Jay Leno when told about the merger. "Surely we have gone too far! Man was not meant to see something so hilarious! This is hubris! Hubris!"

Shares in the new company tripled in value within an hour of GovernMilfDoomsDay International's initial stock offering, singlehandedly causing the Dow Jones to rise for the first time in weeks. The rise in GMDDI has had a "knock-on" effect" leading to the rise of stock in satire-related companies such as OnionCorp, UnCycloBank and Haliburton.

Not everyone is happy with the merger. Scientists and politicians alike have been criticising the move.

At the World Particle Physics Conference this morning, Prof. Stephen Hawking said: "The LHC is a sensitive instrument, vital to our future understanding of the nature of matter. We don't need Hottie McRightwing drilling for oil in the damn thing just because it's funny, am I right? I mean, if you wanna go waste some Caribou, try the Mount Palomar observatory, I hear they got hundreds! Thanks, Sarah, but no thanks!"

His remarks were greeted by laughter and obnoxious hooting noises from his fellow physicists.

Political commentators had some strangely symmetrical remarks to make.

"Sarah Palin has been the breath of life to the McCain campaign," said Bill O'Reilly. "I think that connecting her in the minds of the public with some sort of freaked-out mad-science gizmo for creating Star Trek crap is a bad idea. That's even if we ignore the fact that the word 'hadron' sounds kind of rude.

"What happens if the particleons from this LHC thing create an evil, goateed John McCain? What if it opens the gates of Qward, allowing the Anti-Monitor access to our dimension? What happens if the thing, like, latches onto a time corridor, like in Resurrection of the Daleks? That would be just what the liberal media wants to happen."

In Washington DC Dick Cheney spoke in favour of the idea that his successor as Vice President could be contractually tied to the world's largest particle accelerator.

"In spite of all the naysayers, Sarah Palin has the potential to be the Republican version of Harry Truman - a moderately corrupt local party hack who gets to be president after the death of an old guy," he said. "Meanwhile, the LHC could potentially destroy every man woman and child on Earth. It's basically win-win."