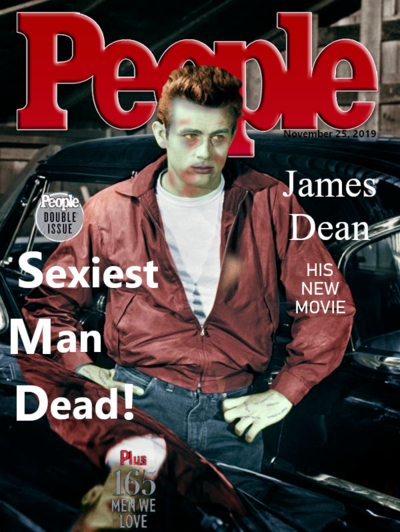 HOLLYWOOD -- People Magazine has revealed the Sexiest Man Dead for 2019... Hollywood icon James Dean. Born February 8, 1931, in Marion Indiana, James Byron Dean became a teen rebel in two Hollywood classics -- East of Eden and Rebel Without a Cause -- before dying in a car crash September 30, 1955, at the age of 24. He released one last movie, the posthumous Giant.

Now, nearly 65 years later, Dean is ready for his comeback. He has been announced to star in a 2020 movie about the Vietnam War. "Back in my day, it was impossible for a dead guy to get any work," Dean says. "Now with the futuristic computer whosits and whatsits and gizmos, I can play my old, unzombied self for all eternity. On the flip side, I can forgo computers and do horror movies. I'm talking with Greg Nicotero about guest starring on The Walking Dead."

Dean's Hollywood return is entitled Finding Jack, directed by Anton Ernst and based on the novel by Gareth Crocker. Unfortunately, Hollywood isn't welcoming him back with open arms.

"Eh, whatever," Dean says. "I was always a bit of a rebel anyway. I can make whatever movie I want now. I really want to get a Marvel gig. I was almost Batman, by the way. Good luck to Pat Robertson (sic). I liked him in those Dracula (sic) movies with Kirsten Dunst (sic)."

"And by the way," he adds, "Marty, I've seen your films and I think they're all shit. And Francis, what did you do to Brando, man? He used to be cool."

For more on the Sexiest Man Dead – and all the hottest guys in Hollywood, dead or alive – don't fear the reaper and pick up this week’s issue, on stands Friday, Nov. 15!

For more fake news on this topic, read:
Empire Magazine resurrects Stanley Kubrick to ask his opinion about Marvel movies