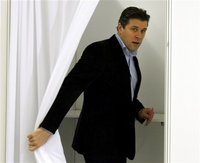 Political-party chairman Bjami Benediktsson rushes behind a curtain as the media and public arrive to question him about the proposed bail-out.

REYKJAVIK, Iceland -- Iceland's voters on Saturday resoundingly rejected a $5.3 billion plan to repay Britain and the Netherlands for covering the collapse of an Internet bank. With 40 percent of the ballots counted, 93 percent voted "no" and just 1.5 percent said "yes." What happened to the other 5.5 percent was not clear.

The money would have covered payments to 340,000 Icelanders who had accounts with Icesave. The accounts paid interest that was too high by the same 5.5 percent, a typical error rate when Icelanders perform arithmetic. The plan would have cost the average Icelander about one-quarter of his take-home pay for the next eight years. The rejection could make it harder for Iceland to imitate the United States and borrow up to the eyeballs from China to fake an economic recovery.

President Olafur R. Grimsson was baffled by the vote. "We negotiated a common-sense plan to have Icelanders send one-quarter of their money to foreign countries. Who's not for that? I mean, what else are they going to do with the cash?" Indeed, there is a scarcity of night life in Iceland and very little else to buy there.

Governments around the world no longer ask voters to approve bail-outs. Instead, they just spend the money, then tell voters they have to cover it to avoid all hell breaking loose, such as a ruined credit rating. Puerto Rico cited bond ratings last year to adopt a sales tax on top of its income tax. In the United States, former President Bush's notorious TARP program was supposed to be "repaid...with interest," even if it had been spent to buy up worthless mortgages as the law required. President Obama's stimulus package doled out even more loot, and the voters have not yet been asked to pay. (Unless you count the energy bill, the cigarette tax, or the first four years of "health care reform" before the benefits start.)

Mr. Grimsson said he would return to negotiations with the foreign lenders. "I wanted to do a deal, but, hey, the voters said no." Everyone knows the feeling at the car dealership when that handsome salesman just can't get his mean boss to ink the deal and you wind up paying extra. "We'll get it done," Mr. Grimsson continued. "Everyone knows the rules. We spend, and the chumps pay."