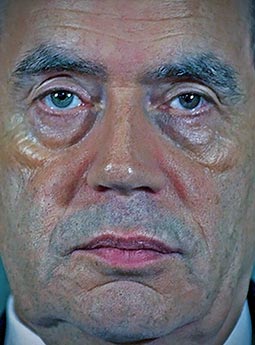 "The evildoers are becoming ever more inventive. For example, beneath his teenage daughter's brassiere is just where a terrorist mightn't expect us to inspect with our strip scanner so that is exactly where we will inspect. Very closely. It is vital that we see every contour. I've spoken to the designers and they promise me that it may even be possible to view actual flesh tones before this decade is out."

Responding to concerns that MP4s of naked Britons may fall into the wrong hands, the Prime Minister said: "I can guarantee that these videos will never appear on a Czech website or anything like that. They'll be burned to a series of highly secure Maxell DVD+Rs and stored in the tyre well of my wife's Megane. Safety back-ups will be kept under the floor boards in my bathroom. Tertiary safeties will be sent via first class post to Gerry, a mate of mine in the Midlands."