UnNews:I'm going to fire the Death Star on Earth if you don't vote for Bernie Sanders

Bernie is the one who should be your president.

I've been keeping track of Trump for the longest time. Since the 70s I've been watching him plot his evil takeover of the United States like Palpatine took over the Republic and turned it into the Empire. Throughout the decades he has been hypnotising people with his charm and radio voice with the intention of getting more and more powerful gigs. I thought he would stop with The Celebrity Apprentice, well I was wrong I'll tell ya. Wrong! He suddenly announced his presidential campaign and used his evil powers to influence and win the presidency in 2016. It was like everybody in the Senate cheering for Palpatine when he announced the formation of the Empire.

So this is how Democracy ends? with thunderous applause?

I have had the misfortune of watching as Trump destroyed social security, food stamps and the taking of candy from young children! People have cried, people got mad and people have even died during his administration. Those poor immigrants are being kept in death camps and I just heard rumors that he's going to replace the US flag with a Nazi symbol.

Not if I have anything to say about it, which is why I... Natalie Yuki Greene, am going to build the universe's first real life Death Star with the help of funds I have been procuring through the years and you know who I'm going to aim it at... That's right, Earth! 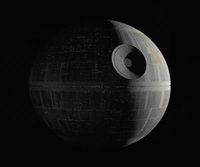 I shall shoot this at your planet if Bernie doesn't win.

I won't fire it if you go down and vote for Bernie Sanders. I'm serious, Bernie's going to give us free school, free healthcare, he's going to tax the rich and improve our infrastructure to help us rebuild these United States of America. Right now Trump and his goonies are using terrible tactics like putting on white sheets with black holes and mocking his bald head and it's really hurting Sanders in the polls. If Bernie does not win then I can ensure you that Earth will be doomed and I shall fire the Death Star laser to ease the pain of America.

Bernie is the best chance, Trump ain't got nothing on this guy... This is the same Donald J. Trump who wore diapers until he was 13 years old, who wasted all his daddy's money on Atlantic City Casinos because he wanted to be "mature", who slept with a picture of Hitler on his nightstand. Bernie's clean compared to him and still the American public choses to defend Trump every which way.

I've heard people dispute the facts and claim some wild nonsense to defend his actions and I can ensure you that my Death Star will have all the people screaming in panic, then suddenly get silenced by the laser blowing up their planet.

It's not built yet but by next year I will have built a replica of the Death Star and there's nothing you poop flinging monkeys can do about it... If Bernie Sanders wins then I will blow up the Death Star. But... If anybody else but Bernie is nominated for president, I'll blow this planet up. Bernie Sanders is the only choice we have to defeat a fascist America and I will ensure that they will have no choice but to worship Bernie.

So vote Bernie Sanders in 2020, or else I shall shoot my Death Star and blow your planet up.