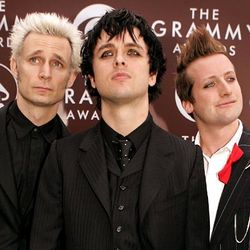 MIDDLE AMERICA AND/OR CANADA -- Retail monopoly and threat to America, Wal-Mart, has told ultra-lame band Green Day that it will not stock its newest CD, 21st Century Breakdown.

Wal-Mart spokesperson Fred Habbemaster told UnNews today that, "in light of the fact that some of the lyrics are salty, but mostly because Green Day has gone from dreadful to unbelievably lame, we feel it is unconscionable to foist such crap on the American public. I mean, we have a conscience, you know?"

The band says the giant superstore chain refused to stock its latest CD because Wal-Mart wanted the album edited for language and content, and they refused.

Frontman Billie Joe Armstrong said in a recent interview, "Wal-Mart's become the biggest retail outlet in the country, but they won't carry our record because they wanted us to censor it."

While Wal-Mart sells CDs from acts known for unlistenable content, including Eminem's latest, they offer customers the "clean and not so stupid" version of those CDs. They are edited for content that may be objectionable, with truly awful tracks deleted entirely. But in Armstrong's view, "There's nothing dirty or musically awful about our record."

"They want artists to censor their records in order to be carried in there," he said. "We just said no. We've never done it before. You feel like you're in 1953 or something."

Wal-Mart said that it's the company's long-standing policy not to stock any CD with a "content is crap" or "parental advisory sticker".

"Apparently Mr Armstrong has selective perception in this case, and chooses to ignore our policy against terrible music, or content which is not music at all but is marketed as such," said Fred Habbemaster. "We offered to produce a selection of tracks which were indeed music, but no agreement could be reached because the entire album was crap"

"As with all music, it is up to the artist or label to decide if they want to market different variations of an album to sell, including a version that would remove a CRAP or PA rating," Wal-Mart spokeswoman Melissa O'Brien said. "The label and artist in this case have decided not to do so, so we unfortunately can not offer the album."

But bassist Mike Dirnt said, "As the biggest record store in America, they should probably have an obligation to sell people the correct art."

While Armstrong, Dirnt and drummer, Tre Cool (named Person With The Stupidest Name 2008) are still top-sellers without Wal-Mart, Armstrong said the store's policy is disappointing, considering it has become the dominant seller of CDs with the decline of traditional music stores.

"If you think about bands that are struggling or smaller than Green Day ... it's scary knowing that even if you get your record out in places like that, they might not carry it just because of the content and you'd have to censor yourself, or produce music which doesn't cause nausea" he said. "I mean, what does that say to a young kid who's trying to speak his mind, or bullshitting himself that he has any talent whatsoever, making a record for the first time? It's like a game that you have to play. You have to refuse to play it. And by play "it" I mean "actual music."