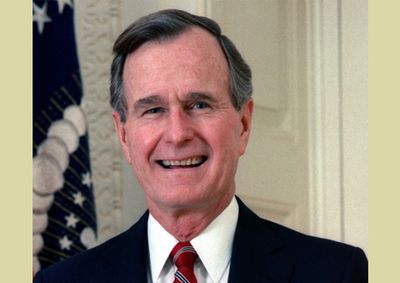 George Herbert Walker Bush, 41st President of the United States (1989-1993) and alleged gentleman, has died. He was 94. While most of the criticisms directed at Mr. Bush concern Operation Desert Storm/The Gulf War, the reversal of his "Read my lips: No new taxes" campaign poromise, and the tanking of the U.S. economy -- all of which lead to Bill Clinton's victory in the 1992 election -- as well as his son, 43rd President George W. Bush, mainstream obituaries have glossed over Mr. Bush's much darker forgotten legacy.

Make no mistake: I'm not necessarily condemning the man, and certainly not now. I'm just presenting all sides of George H.W. Bush. I would like to send my condolences to the Bush family during this difficult time. But the cold hard truth must be told, revisionism be damned.

When Bush ran for president against Mike Dukakis in 1988, a PAC with ties to Bush ran a racist ad called "Weekend Passes," which you can watch above. On October 4, the ad, which makes clear that murderer Willy Horton was black and his victim was white, was pulled from the airwaves. Even right-wing Republicans -- even Roger Stone, of all people! -- admitted that the ad was racist. 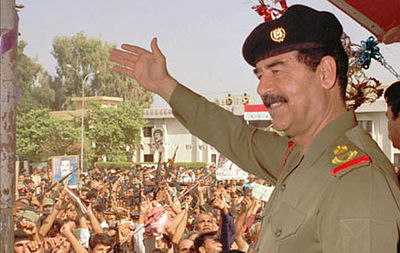 A President named Bush lied his way into a war with Iraq. Sound familiar?

Bush lied his way into war. No, not that Bush, and not that war, even though that's true, too. Bush 41 used lies and propaganda to justify pissing off Saddam Hussein. Bush claimed that Iraq invaded Kuwait without warning, which is simply not true.

“What [Bush] omitted to mention was that the U.S. ambassador to Iraq, April Glaspie, had given an effective green light to Saddam Hussein, telling him in July 1990, a week before his invasion, '[W]e have no opinion on the Arab-Arab conflicts, like your border disagreement with Kuwait.'”

Then Daddy Bush claimed that he was invading Iraq in order to aid the Saudi Arabian government. You can read 41's full speech here (archived for posterity).

“Citing top-secret satellite images, Pentagon officials estimated… that up to 250,000 Iraqi troops and 1,500 tanks stood on the border, threatening the key US oil supplier.”

However, St. Petersburg Times reporter Jean Heller got hold of such images, what she found was damning -- nothing but dry empty land that makes Lawrence of Arabia look like Sum 41's "Fat Lip" music video.

There's no nice way to put this, but George Herbert Walker Bush was a war criminal. 88,500 tons of bombs. 158,000 Iraqi civilians. Iraq's infrastructure shattered. Beth Osborne Daponte's estimate of the body count ran counter to that of Bush and landed her in trouble.

And remember that whole Iran-Contra Affair that defined Ronald Reagan's second term? Bush walked away "clean" by claiming he was "out of the loop." Sort of like Henry Kissinger and Watergate. Basically, Bush told the special counsel, Lawrence Walsh, to take a hike. Bush also, on his final day in office, pardoned six Iran-Contra perps, including a guy awaiting trial, Caspar Weinberger.

Sounds like something an orange wannabe demagogue would cook up, doesn't it?

Back to the subject of racism, Bush really got the ball rolling on the war on drugs that Richard Nixon had started. Millions were incarcerated, and hundreds of thousands died from AIDS. Even the nuttiest, most despicable Republicans say Bush went too far.

I don't subscribe to any JFK Assassination conspiracy theories, though the ones involving E. Howard Hunt are interesting (especially the one from a 2007 issue of Rolling Stone). Bush was head of the CIA at the time, and conspiracy nutcases like to believe that he was complicit in Kennedy's assassination. I'm not saying it's true or anything. I maintain that it was Lee Harvey Oswald alone. I'll simply let you be the judge.

And let's not forget about Panama '89.

Now, to be fair, though, he was a decorated World War II vet, and he and Reagan did help to end the Cold War that had been raging for decades. When Bush ran against Reagan for the Republican ticket in 1980, Bush hated the idea of Reaganomics, which he dubbed "Voodoo economics." And he did become friends with The Clintons and the Obamas, so he did eventually play nice with both parties. Also, he was one hell of a thrill seeker, parachuting to celebrate his 75, 80, and 90th birthdays. These are ages where most people attempting this would probably have a heart attack midair.

Bush rehabilitated his image during his post-presidency, to an extent. I have my opinions, but this is not the place for them. I will simply let the American people decide how they want to remember Mr. Bush.

Again, despite what Bush may or may not have done in his life, I wish to offer my condolences to the Bush family during this difficult time. Now, you have seen all sides of the man.

Oh, and did I mention that he groped at least seven women?