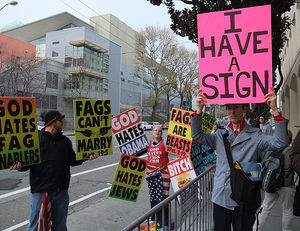 An unintended effect: the demise of the Westboro Baptist Church will make life more difficult for this man, who earns his living making witty retorts to hate speech in the form of ironic counter-signs.

TOPEKA, Kansas -- Fred Phelps, leader and founder of Westboro Baptist Church, announced at a press conference Friday that he was disbanding the church after actually reading the rest of the Bible.

“I know this will come as a shock to many of you, but most of the Bible doesn’t deal with gay people and how evil they are,” said Phelps before a small assembly of reporters at a private press conference, the first gathering in the short history of the church to be completely free of picket signs. “To my great surprise, the Bible doesn’t even mention things like ‘fag-enabling,’ and is silent on the matter of whether or not earthquakes and airplane crashes are God’s roundabout revenge against the gays. Rather, Romans 1:26 says that faggotry is God’s roundabout revenge against idolaters. ”

Phelps went on to detail how his personal worldview — which had previously been informed by a very literal and unflinching reading of Leviticus 18:22 — was impacted by reading the Bible’s 7,958 other verses.

“The Bible also says nothing — nothing — about making hateful picket signs,” continued Phelps.

The reverend and disbarred attorney was similarly taken aback by things the Bible did say.

“I didn't know that wearing clothes made from a wool-blend fabric was considered an abomination in the eyes of God, right up there with faggotry, witchcraft, and independent thinking,” said Phelps, “but it’s right there in Leviticus. Leviticus says the same thing about eating shellfish, too, which I can’t help but find silly.”

Phelps went on to explain more of his findings and impressions upon actually reading the book he had long professed to live by, including bafflement at Jesus’ cursing of a fig tree in the gospel of Mark and outright confusion at virtually everything in the Old Testament. Phelps was quoted as saying that the ancient Hebrew writings that served as the foundational texts of Christianity made God seem like “kind of a bastard.”

“I never knew how many people the Lord God, in all his love, killed,” continued Phelps. “Likewise, I was surprised to learn that most of them weren’t even the slightest bit gay.”

In light of his discoveries, Phelps decided to disband the Westboro Baptist Church. The decision, he said, was not popular with many of his family members.

“My lovely daughter Shirley called me a fag-enabling sophist liberal, which was hurtful, while my son Timothy had the gall to call me literate,” Phelps said.

With the demise of the Westboro Baptist Church confirmed, Phelps wrapped up the press conference by explaining his plans for a future organization.

“The one Biblical passage that really stuck with me was Psalms 137:9, ‘Blessed is he who seizes your infants and dashes them against the rocks.’ Those words have inspired me to start an abortion clinic in a rock quarry, where I feel I’ll truly be doing the Lord’s work.”