WASHINGTON, D. C. - The Food and Drug Administration (FDA) expanded its recall of peanut butter, despite protests by such industry giants as Skippy’s, Peter Pan, Jif, and others.

Initially, the FDA said that it was recalling the food product because of concerns that it might be contaminated by salmonella, the same pathogen that has contaminated beets, lettuce, and other foods. However, when General Foods scientists proved that their product was not infected by the bacterium, the FDA admitted that the reference to salmonella was merely a “politically correct ploy” that was intended to protect the sensitivities of illegal immigrants, many of whom work in the food manufacturing and food processing industries, including the sector that makes, packages, and distributes peanut butter.

Lester Grubb, a spokesman for the FDA, told Unnews reporter, Lotta Lies, “More than half the workforce involved in producing peanut butter consists of illegal aliens, mostly from Mexico, for whom English is a second language.” These laborers are “hardworking,” he said, but many are illiterate. They were confused by the term "peanut butter," thinking that, to make the sandwich spread, they had to urinate, or “pee,” on the nuts as they moved along factory conveyor belts. In some cases, some workers also added chopped bull or pig testicles ('nuts") to the vat in which the peanut butter was whipped after the peanuts, having been marinated in workers’ urine, were deposited. According to shift supervisors, the testicles were “most likely” added only to the “crunchy” style of peanut butter, although both the smooth and crunchy varieties were “treated” with workers’ urine. “Now I know why the Mexicans drank so much water,” Penelope Sweet said. “I thought they were just hot and thirsty from working so hard. Instead, they were filling their bladders so they’d have a good supply of urine for the peanuts.” 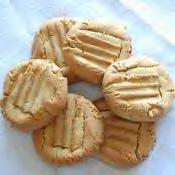 Originally, the recall was limited to just the Jif brand of the product, but, once the FDA admitted that a fear of hepatitis, rather than salmonella, was the real reason for the recall, Peter Pan and Skippy’s confessed to having hired “thousands of illegals,” so their brands of the product were included in an expansion of the recall.

Under the terms of an agreement with the FDA, which promised not to lie to the public anymore, even to protect the sentiments of illegal aliens, peanut butter manufacturers will henceforth refer to peanuts as “goobers.” This tactic should prevent the type of confusion among workers that caused the recall.

“Meanwhile,” according to Grubb, “no consumer is at risk for hepatitis,” which is spread by urine, “because the contaminated product has been, or is being, recalled, and that's no lie.”