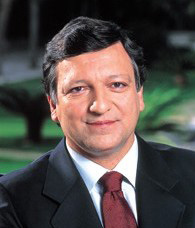 BRUSSELS -- European Union Commission president Jose Manuel Durao Barroso Wednesday called on the children of Europe to follow him on a direct march to the Holy Land to end the Israeli/Lebanon conflict.

"Diplomacy has failed," he said. "Force has failed. The only option I see for peace in the Middle East is for our kids to walk across the seas and bring the two opposing sides together."

Barroso said he would personally lead a band of orphans and shepherd children from Brussels in a "children's crusade" to Marseilles. From there, he said, his band of children will walk to Israel via a dry path that emerges when the Mediterranean Sea parts in front of them, and then proceed to deliver a message to Israeli Prime Minister Ehud Olmert.

"This is a very special message," Barroso told reporters. "Jesus gave me this letter to deliver directly to the Prime Minister. And when he sees the letter, and all these faithful children, I fully expect him to resolve his problems with the Hezbollah militia. And then all of us will live together in a bounteous land. Won't that be wonderful?"

A large crowd was gathered outside the EU's administrative offices Wednesday night as children across the continent responded to Barroso's call.

"Mr. Barroso says that we'll have all the milk and honey we want in the Holy Land," said Stefan Schwarzwerd, 7, standing outside the offices with a lovable Labrador Retriever named Jojo. "I don't have parents and I'm hungry all the time. I can't wait!"

Barroso has appeared before the children several times and reminded them that anyone who dies on the journey will go directly to heaven.

"We are a praying people who want peace throughout the world," Bush said. "And our church attendance is much higher than Europe's. So if those secular humanists can get the sea to part, we will have no trouble getting across an entire ocean."

Children gathering to begin the overseas trek to Jerusalem.

"I think it's absolutely wonderful," said Marcel Riviere, 51, a self-described "importer/exporter" from the town. "In fact, I'm so moved that I may even take the children on a free side-trip to Tunisia . . . to sightsee, of course."

Barroso's announcement comes on the news of French interior minister Nicolas Sarkozy's surprise resignation last week in order to lead a band of eight-year-olds on a mission to drive the heathen from the sacred places of Christ. Since setting out on foot from Paris on July 25, Sarkozy has attracted 10,000 people and cured several lepers.