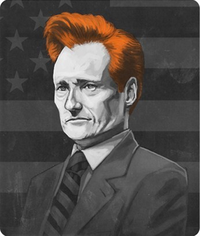 United States -- In a surprise outcome for the most boring presidential election since the last one, all the top contenders were blown out of the water when late night talk show host and super ginger Conan O'Brien won every state in the Super Tuesday primaries, thus sealing the Republican Party's nomination for President in 2012.

"This is the most amazing thing ever to happen to me," said Conan upon hearing the news. "I'm so honored. I think the most appropriate thing to say right now is: Suck it, Colbert!"

Conan's big win was the result of a write-in campaign by his army of fans, titled Coney 2012. According to the official Coney 2012 YouTube video, the purpose was to carry on the image of Finland's first female president Tarja Halonen, whose final term expired on March 1st. Halonen became famous across the pond for bearing a striking resemblance to Conan O'Brien, who joked about this frequently on his former talk show, Late Night. At one point he sent his love to Finland by insulting Sweden, which lead to a bit in which he insulted every other nation on Earth out of fairness. "Which is a great bonus," the video commented. "What better candidate for the next Republican President than one who's already pissed off all the other countries?"

Upon winning the nomination, Conan received a flood of endorsements from twenty celebrities and a dozen political figures, including:

Conan O'Brien has stated that he has no plans for his campaign as of yet, except that he's considering Rick Santorum as his running mate, "...for the whitest ticket in American history."

For more fake news on this topic, read:
John Edwards: "I am Conan O'Brien's brother"
Retrieved from "http://en.uncyclopedia.co/w/index.php?title=UnNews:Conan_O%27Brien_wins_Republican_nomination&oldid=5650899"
Categories: