UnNews:Chupacabras new pets to the stars 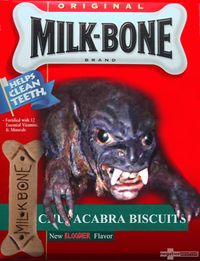 Del Monte foods, makers of Milk Bone brand dog biscuits, has branched out to accomodate the latest pets of the stars: chupacabras.

SAN FRANCISCO, California -- Designer pets have been on the celebrity circuit for some time now, but this new trend knocks it up a notch. Chupacabras, long known for their gnarly disposition and ravenous appetite for live animals, are now licensed in California to a few select pet boutiques.

At a cool $50,000 apiece, these little buggers are not cheap. State law also requires prospective owners to take a two week safety course which includes CPR and first aid treatment for severed limbs and heads. Added to a month long course in chupacabra handling, these pets are not for the faint of heart, or wallet. 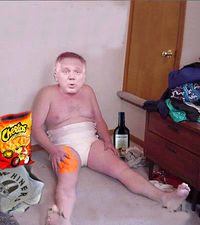 We caught up with Glenn Beck at a little soire he put together for his admirers.

Pete Vespucci of Petes Wrangling in LA spoke to UnNews about his years of experience with chupacabras. "Well, I can see using them for movies and such, but it's weird to think of them as pets. On a movie set, mostly what they need them for is gory behaviour, which is not a stretch for them. I always wore guard dog training gear, so I don't know what someone like Paris Hilton is gonna do."

Crying pundit Glenn Beck has picked up three chupacabras for his home in New York. he told UnNews, "The kids think they're adorable, but I got them mostly to keep black people away. The house help is scared shitless of them, so that's an added bonus. I'll bet my change jar will remain untouched from now on."

Del Monte Foods has hopped on the bandwagon, developing the first chew treat for chupacabras, based on their best selling "Milk Bone Dog Biscuit" line of products. Sales representative Pamela Hesiod told UnNews, "We've had increasing demand for this sort of thing. Who doesn't want to reward his little, fuzzy-wuzzy choopy-noogums for disemboweling nasty trespassers?"