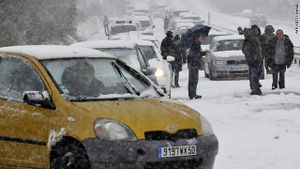 Enraged and bewildered Frenchmen cope with more than an inch of snow.

LONDON, England -- Eurostar (commonly mistaken for a continent-wide amateur singing contest), stunned the world today by announcing it had shut down operations. None were more surprised than the 1,364 passengers of five Eurostar trains inside the Channel Tunnel, connecting England and France. Following what a Eurostar spokesperson called “bad weather”, “low air temperatures”, “buildup of freight traffic” and “loss of traction” on the rail, the passengers were stranded hours beneath the Earth’s surface. To make matters worse, what was supposed to be a two-hour evacuation procedure ended up consuming more than fourteen.

"It makes no sense, that the entire rail was shut down for such a mundane reasons as bad weather in northern France," said Agent Fox Mulder of the FBI, in a telephone interview with UnNews. "This is all deeply suspicious. The Chunnel is networked with fail-safed computer systems, with triple redundancies built into all sub-systems. I do not believe there is a "natural cause" for all of these technological failures."

Mulder ventured a theory that parasitic aliens caused the shutdown by, "using their minds to control Dark Matter, funneling it into a seven-dimensional vortex. They could also be attracting asteroids to Earth, in preparation for the great invasion." Of course that's all bullshit.