UnNews:Cheney visits Hell to shore up support for Iraq war 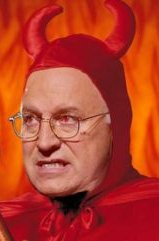 Satan's Lair, Hell --- US Vice President Cheney visited Hell this week to discuss the Iraq war with demonic leaders and shore up support for his administration's policies. The whirlwind tour took him through the river Styx, the first four circles of Hell, Through the Republican national Convention, and culminated with a state dinner at Satan's lair on Saturday. A follow-up trip to Purgatory was canceled at the last minute by God, who said Mr. Cheney has "no chance" at redemption.

The trip was intended to ensure that the Devil and his minions are still supportive of America's latest strategy in Iraq, and that they will remain part of the coalition of the willing. Three thousand demons are currently stationed in the southern city of Basra, but there was speculation that much of that force would be withdrawn soon. Another four hundred imps serve as part of the NATO mission in Afghanistan.

A spokesperson for the Vice President said the trip was deemed a success, and that Cheney promised Satan hundreds more American souls for the Evil Lord's continued support. He had sold his own soul long ago, when first becoming CEO of Halliburton. Mr. Cheney also reportedly struck a personal deal with the Grim Reaper, who promised to keep the Vice President alive until at least 2010, despite the fact that his heart stopped beating years ago. Details of the deal were undisclosed but are rumored to include Cheney being forced to shoot his friend yet again, and to "get it done right this time."

The visit concluded with a formal dinner at Satan's lair, where lucky guests dined on the souls of the damned, garnished with slices of lemon. Raising a glass of Democrats' blood, Satan toasted to "the mutual friendship between Hell and the Bush administration." The only sour moment came when Cheney asked if it was ok to invade Iran. That country's leader, Mahmoud Ahmadinejad, is a dear personal friend of the Devil, who is thus sorely opposed to any US invasion. Out of respect for Cheney though, Satan did promise him "years of more fun in Iraq."

Meanwhile, Democratic leaders in Congress are appalled that Cheney continues to visit Hell and appease Satan. "Bush officials are such hypocrites," explained Senate Majority leader Harry Reid, adding "isn't Hell by definition part of their reviled 'Axis of Evil?'" White House spokesperson Tony Snow rebuffed such criticism and countered that "Satan got rid of his weapons of mass destruction long ago, and the Democrats are just trying to divert attention for the true evil around here - Nancy Pelosi's makeup."