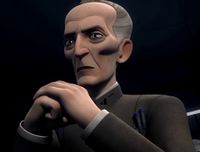 A promotional sneak peak of the 13th Doctor. We've come a long way since the bubble wrap monsters.

UNITED KINGDOM -- If there's one thing consistent about the character of The Doctor, it's his abusive relationship with death. In that spirit, the BBC has announced that the new actor to play Dr. Who next season will be the late Peter Cushing's form brought to us through CGI. The computer generated Doctor will be an animated digital image of Cushing's likeness applied via motion capture to a low-paid extra on set, synced with recordings of his actual voice processed through an audio synthesizer app downloadable for Microsoft. It's been called the greatest special effects the Doctor Who budget can buy.

Peter Cushing had previously played Dr. Who[1] in the '60s spin-off movies Dr. Who and the Daleks and Daleks – Invasion Earth: 2150 A.D., both remakes of First Doctor stories and thus considered out of continuity with the main series. Although this will not be the first time Cushing has played the character, he will have the honor of being the first actor to play the Doctor onscreen while dead.

In an interview with BBC Radio 4, new showrunner Chris Chibnall spoke on behalf of the BBC and presented their reasoning for the unprecedented casting decision:

Though Chibnall seemed confident in his frankly condescending explanation, the choice of Peter Cushing is view by critics and television analysts as a huge gamble, given that most casual viewers aren't old enough to remember Cushing's minor, almost obscure role within the Doctor Who franchise. Instead of invoking warm nostalgia, the unholy computerized uncanny valley ghost lead could end up just being another one of the show's scary monsters that traumatize the kiddies. Although that itself could arguably be a strength rather than a weakness.

As sexy as you remember.

Chibnall assured listeners that the risk is worth it, and that CGI Peter Cushing will simply be given a short trail run to see how viewers will react. The Ghost of Peter Cushing is ultimately a mere stepping stone for greater pandering.

The Doctor Who fandom is almost evenly divided over this new direction the show is taking. A vocal chorus of social justice advocates are furious that the Doctor's eternal status as a white man has all-but been sealed, unless computer generated blackface becomes socially acceptable. However, other fans are pleased at the prospect that a CGI Doctor will be smoother to turn into gifs to spam all over Tumblr dashboards. Big Finish Productions, no strangers themselves to resurrecting dead Doctors, are jealous that they didn't think of it and have condemned the entire ordeal as "witchcraft".